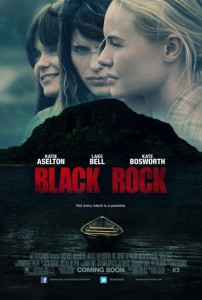 There is a subgenre of Indie films that has the unfortunate name of “Mumblecore”. It refers to a series of extremely low budget efforts where dialogue moves the films along. As in the Woody Allen or Richard Linklater days of old, “mumblecore” films are 90 or so minutes of characters talking. Most of the films in this sub-genre are very good with a few being extremely interesting and masterfully written, such as The Puffy Chair, Baghead, The Freebie, Safety Not Guaranteed, and Your Sister’s Sister.

The common thread amongst these films is the enormous talent of the Duplass brothers, Mark and Jay. In most “mumblecore” films they either act, write, direct, or all of the above. I believe these brothers to be the most talented triple threats in the film business.

With Black Rock the Duplass brothers, along with Director, co-star, and wife to Mark Kate Aselton have moved into the horror/thriller genre with a film that is a solid throwback to the more interesting and artfully done genre films of the 70’s.

In this film we meet three friends played by Kate Bosworth, Lake Bell, and director Aselton. They return to an island that they knew as children to relive old memories and heal old wounds, as there is a rift between Bell and Aselton’s characters. Believing the island to be uninhabited, they take a motorboat across the bay, far from town of course, and plan to stay a few days.

Things are fine at first and then the ladies meet three hunters who are on the island to “hunt deer” they claim. Bell’s character recognizes one of the men from high school so the girls invite them to have food and drink at their campfire.

Aselton’s character becomes drunk and way too flirtatious inviting one of the men into the deep woods to fool around. This leads to an unexpected and brutally violent incident. We then find our three leads fighting for survival as the violence escalates and they find themselves on the run for their lives in a modern, low budget version of 1932’s The Most Dangerous Game, peppered with aspects of John Boorman’s Deliverance and a nod or two to Sam Peckinpah’s controversial classic Straw Dogs.

The film is not wholly original in concept but it is entertaining and works on a number of levels.

As a thriller, the film is handled with style, and many scenes pop with a terseness missing from most modern genre films.

The casting works and our three leads make an interesting trio playing well off one another. I have never been a fan of Kate Bosworth, but she is very good here as the friend who is trying to keep everyone happy and upbeat. Lake Bell is an actress who has been noticeable in small roles in bigger Hollywood films such as Pride and Glory and Its Complicated, and has been carving out a niche for herself in comedies as of late. I like her work here and would like to see her do more drama.

The “hunters” are played by Anslem Richardson, Jay Paulson, and first timer Will Bouvier. These men are not written as standard central casting psychos. In a moment of well written exposition by Paulson, we understand that these men are just back from a tour in Afghanistan and are dealing with very real issues. This is not used as a ploy by the screenwriter but as an honest attempt at creating honest people on the screen. These men are not monsters but become, as do the women, victims of their surroundings and react, some would say accordingly, when the conflict arises.

Director Aselton does striking work here behind and in front of the camera. She knows what kind of film she is making but never lets it slide into parody. Her eye as director shows a great respect for character and tone. There are many instances where the film could have become mere exploitation to feed horror audiences blood lusts, but Apleton and writer Mark Duplass do not potray these women victims per se. They only cower when they must and find courage to survive when the opportunity presents itself.

The main reason the film works so well is the screenplay. Duplass has written interesting people that we can care about. Beginning with a familiar plot device, we are treated to palpable characterizations and situations. We know from the opening moments that we are not in for another grindhouse blood fest but rather a tense thriller with very good performances, tight direction, and an original screenplay full of interesting ideas. The filmmakers never pander to the audience. They believe we are smart and hungry for something a cut above the carbon copy horror films of late.

Black Rock is very short and runs just under 80 minutes. I have heard complaints that there is too much time spent getting to know the women before the film “kicks in” but I feel this to be a key to the film’s success. We are meant to identify with the three women and the three men who they meet; get to know them first and then make decisions when lines are drawn. The filmmakers leave it up to us who we sympathize with. This is not a film where we know immediately who to root for. Yes, there are a couple of moments where the audience could be driven to cheer for someone but the screenplay is not manipulative.

Mark Duplass says he wrote the film in a couple of days while on a “weather induced layover” trying to make it to a film set. In that short time he crafted a seriously entertaining thriller that succeeds on a small budget while almost all big budget Hollywood shockers of this ilk fail.