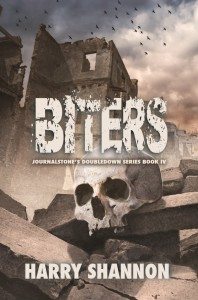 Biters substantiates the axiom that the best zombie books are not about zombies at all—and this one is an excellent zombie tale.

The eponymous creatures are not quite zombies. They are the survivors of a mutated virus. In their madness they look, act, and eat like zombies, so the differences are minimal. Also like zombies, they create more of themselves through a simple bite…although they are rarely satisfied with just a nibble.  They are incipiently present, of course, throughout the novel, most often as a muted threat, as ragged hordes straggling across the Nevada landscape on the lookout for humans for dinner.

Yet in another sense, zombies—Biters—are at the center of the tale. In the beginning, the main characters seem fully alive, vigorous, survivors of a world dissolving into turmoil. Buck Ryan is one of them, although more mobile than most, driving his old Chevy truck through the death-lands of Nevada toward a small enclave, surrounded by wire fencing and lit by strings of Christmas lights. His destination: a strip joint named The Pussy Parlor, operated by an old flame, Sarah Gallagher.

It takes a few highly atmospheric pages for the principle action to emerge, but shortly after arriving at the Parlor, Ryan is off again into the wilderness, full of plans to hijack a shipment of medicine, drugs, and other critical supplies salvaged from other small communities that didn’t survive the biters’ attacks. He will kill Sarah’s current lover—pimp, cohort, whatever term works best—and split the profits with her.

By this time, the underlying suggestions of the title and the setting become increasingly clear: the true biters—the true villains of the piece, as it were—are not wandering mindlessly through the Nevada desert: they are huddled within the enclave, within The Pussy Parlor, within Buck Ryan and every other ostensibly healthy human in the story. All are zombies. All act only according to their own appetites. All are infected…with greed, hatred, lust, to murder and destroy in a world that is all but dead.

And in the end, only Buck Ryan is given a choice—whether to join the human-biters or to remain fully human.

It is not an easy choice.

Biters is not an easy book. It is harsh, direct, sparing no details needed for the story to move to what almost seems a pre-ordained conclusion (in a cosmic sense, perhaps, certainly not in the sense that the story is predictable). The characters are strong, including the single biter kept captive in a cage outside the Parlor, almost an icon for everyone in the town, who seem free but cower behind their wire-walls as well.

Biters is coupled with Brett Talley’s remarkable The Reborn (for my review, see: http://michaelrcollings.blogspot.com/2014/09/brett-talley-reborn.html), comprising a volume of horrors as startling as it is well written.