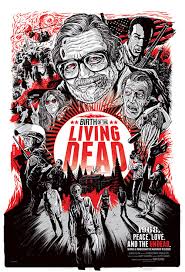 Birth of the Living Dead

Night of the Living Dead was made on a shoestring budget by George A. Romero and his crew of local Pittsburgh first time filmmakers in 1968. All they wanted to do was to put together a movie that they figured would be seen by their friends and, with a little luck, by a few people in drive-ins along the East Coast. What they did was create a groundbreaking picture that would change the face of horror cinema, put George A Romero in the top tier of genre filmmakers, and jump start a sub-genre that is still going strong today in television and films.

The new documentary, Birth of the Living Dead, from Director Rob Kuhns, explores the origins of the film and the turbulent time it was made and examines the social relevance and themes that may or may not be found within its subtext.

Being a fan of Night of the Living Dead and regarding it as one of the finest horror films of all time, I have learned a lot about it over the years. Through the many interviews, articles, DVD commentaries, and books I have become quite the scholar on the behind the scenes happenings of the film. Going in to this new documentary, I wondered if there was anything new to learn.

The answer is no, not really. The film covers everything that one who has studied up on the film already knows. This, however, does not take away from the enjoyment of the film. Most of the interviews are with Romero himself and that makes the trip worthwhile. He is such a fun presence who loves talking about his movies but not in an egotistical or pretentious way. He often breaks into laughter, as the does the behind the scenes crew, when recalling the struggle to get the film made. Here is a man who has made a career based off of that film and is still humbled by the fact that he is getting paid for doing what he loves. I would have loved for the whole film to be one long two hour interview with Romero. That would have been amazing.

One strange bit that the film shows us is of a classroom in Brooklyn, New York. The class is filled with kids around 12 or 13 years old and it is a class on Zombie films. These kids are watching Night of the Living Dead and yelling at the screen while having a blast. Then the teacher breaks the film down for them and, at one point, teaches everyone to walk like zombies, all the while telling us he is teaching “better education through film.” Hey, I’m all for better education through film but I am not for 12 year olds watching zombie films.

Maybe I am getting to be a fuddy- duddy as I get older or maybe it is because I have two sons of my own but I found this a bit disturbing. As much as I love films and the horror genre in particular, I am not sure how I would feel as a parent if I were to discover my school dollars were going to a class where 12 year olds watch zombie films…even they are from Romero! I am glad the director added this off putting sequence.

We hear commentary from other talking heads from time to time such as low budget horror filmmaker Larry Fessenden, who truth be told was one of the doc’s producers, genre producer Gale Anne Hurd, controversial film critic Elvis Mitchell, and film historian Mark Harris. They are interesting to a point and I enjoyed hearing their personal experiences with the film, but I wanted the film to stay with Romero.

The “talking heads” speak on the film’s impact on themselves as well as audiences now and at the time. Much, read “too much”, time is given to explain how the country was in turmoil during 1967/68. It could have been explained in a quick 2 or 3 sentence voice over but the filmmakers dwell on the period through news footage, music, and cartoonish drawings. The sequence is a lead in to a very interesting conversation but it goes on much too long. Again, more Romero interview footage!

The director does well at breaking down the main and supporting cast members and how their roles ran deeper than just what they did on screen. If you don’t already know too much about the behind the scenes of NOTLD you will have fun realizing that many actors played multiple roles that you might have missed when viewing the film.

Birth of the Living Dead covers a lot of ground and does it well. Is it an eye opener? Not for the initiated, but it is quite entertaining for Romero junkies and lovers of “making of” documentaries. It offers the viewer a complete and very insightful look into one of the cornerstone films of modern horror.