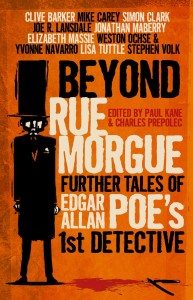 Either you’re already familiar with Poe’s “The Murders in the Rue Morgue” or you’re not.  If not, that’s easily rectified, as it has long been in the public domain and a copy is included in this volume.  It is often credited as being the first detective story – I’ve seen arguments made for a couple of earlier works, but let’s not be pedantic – even though the term “detective” had not yet been coined at the time of its writing.  Poe himself described “Rue Morgue” as a “tale of ratiocination.”  The protagonist, the Chevalier C. Auguste Dupin, a man of almost unparalleled intellect and insight, serves as the prototype for many of his succeeding and better known detectives, such as Holmes and Poirot.  Dupin also reappears in two other Poe stories not collected here but those are also easily available.  There’s little point to me reviewing such a well-known tale as “Rue Morgue,” so I will simply say that Dupin’s methods involve Poe’s “ratiocination,” the application of careful observation, along with inductive reasoning, to draw conclusions based on minute and seemingly trivial observations.  You’ve seen Holmes do it a million times, but Dupin did it first.  This is a collection of short stories that attempt to extend Poe’s work on Dupin, either directly (by offering some further adventures of Dupin himself) or indirectly, by writing in Poe’s style and usually describing a descendant of Dupin’s dealing with a similar, seemingly impossible and outré crime.

Contents of this collection are as follows:

Introduction by the editors, Paul Kane and Charles Prepolec

Edgar Allan Poe’s “The Murders in the Rue Morgue”

Mike Carey, “The Sons of Tammany”

Weston Ochse and Yvonne Navarro, “The Weight of a Dead Man”

Lisa Tuttle, “After the End”

Clive Barker, “New Murders in the Rue Morgue” (other than “Rue Morgue” itself, this is the only reprint in the volume)

Now, on to the new stories (I promise not to wreck any of the mysteries for you):

Mike Carey, “The Sons of Tammany”: Dupin travels to Boss Tweed’s New York City in 1870 and quickly runs afoul of that city’s corrupt political machine as he investigates the strange deaths of some workers constructing the Brooklyn Bridge.  The transposition of the mannerly Dupin to the rough-and-tumble New York setting works very well, though at times he comes off as a bit too much of a caricature.  The mystery is well done though, and the dialogue occasionally very funny.

Simon Clark, “The Unfathomed Darkness”: An excellent mystery in the precise mold of Poe’s creation.  Clark probably captures Poe’s voice, the character of Dupin, and the style of Dupin’s mysteries better than any other writer in the collection.  Dupin must solve the mystery of a corpse found facedown in the snow, with – seemingly impossibly – no footprints or any marks visible around the corpse.  I hope that Clark plans more Dupin pastiches, because he really nailed the tone and language perfectly.

Weston Ochse and Yvonne Navarro, “The Weight of a Dead Man”: This story was well written, but a bit far out there, perhaps straying too far from the original.  It’s a mystery solved by Dupin’s grandson, Nate Dupes, in the Wild West on the Mexican border in 1895.  Decent story, but only a tenuous connection to Dupin.

Jonathan Maberry, “The Vanishing Assassin”: Well-written piece concerning the savage murder of a dealer in Japanese antiquities.  The more Dupin learns about the victim, the more his sympathies lie with the killer.

Joe R. Lansdale, “The Gruesome Affair of the Electric Blue Lightning”: I actually really like Lansdale’s work and don’t think I’ve ever seen anything of his that doesn’t work well.  How could you not love a story involving an ape, the Necronomicon, and some bizarre science fiction gadgetry?  Any story that connects Poe with Grimm’s fairy tales, Frankenstein, and the Cthulhu Mythos has got to be a good one!  Could only have been conceived of my Joe Lansdale.

Elizabeth Massie, “From Darkness, Emerged, Returned”: Like the Ochse/Navarro story, this one is a short piece about a distant relative of Dupin’s, in this case his great-granddaughter Molly, who lives in Brooklyn in the early twentieth century.  Molly is a bit of a shut-in who observes life outside her apartment windows all day, including the aftermath of her love interest’s murder.  It’s not at all a bad story, it’s actually kind of fun, but it has only the most tenuous connection to Dupin.

Lisa Tuttle, “After the End”: A very melancholic little piece about Dupin’s last case involving a serial killer who savages his victims in the style of a wolf, as revealed through a medium at a séance.  The premise and prose in the story were both very well done; this is probably the darkest and most chilling of the stories in the collection, and might have been something that Poe himself might have conceived.  No spoilers, but I just don’t care for the resolution of the story or Tuttle’s portrayal of Dupin.

Stephen Volk, “The Purloined Face”: This is a bit of an odd duck for me, a story that I’m not quite sure works.  A young Sherlock Holmes is informally apprenticed to an old Poe, who apparently faked his own death (!) and is living in Paris masquerading as Dupin, solving crimes the Paris police are unable to.  The pair gets caught up in a series of acid-throwing disfigurements at a Parisian theater in a story mimicking The Phantom of the Opera.  It was jarring to me to see Holmes depicted as a pretty clueless and bumbling young man, almost useless in the face of the persnickety old Poe’s genius.  Perhaps I’m simply complaining about this story as a Sherlock Holmes purist; there’s nothing inherently wrong with the story, per se, it just doesn’t ring true for me.  If you go into this one less wedded to the idea of what a young Sherlock Holmes should be like, you might appreciate it more than I have.

Clive Barker, “New Murders in the Rue Morgue”: A truly dark and melancholic story – not surprising, given its author – about Dupin’s great-nephew Lewis investigating a series of crimes and strange events that seem closely tied in, or at least sharply reminiscent of, the original Rue Morgue murders.  The resolution is pretty twisted and not for the faint of heart, but I liked it.

All in all, this collection was a little bit of a mixed bag when it came to the quality of the stories it contains, but that’s not unusual for an anthology.  I’d have liked to see a few of the stories attempt more of a pastiche of Poe’s Dupin mysteries, rather than just use the basic concept as a springboard for a very different kind of story, but there’s little to complain about here.  Each story had merit, and some were downright excellent.  There’s clearly still plenty of room available for more actual stories of Dupin’s hitherto unrecorded adventures, and I hope Titan Books or another publisher takes up that challenge.  If you’re at all intrigued by the character of Dupin and his unique brand of “ratiocination,” and appreciate the idea of a man of reason tangling with the unknown, then I’d highly recommend this collection.