Between the Devil and the Deep Blue Sea- Book Review 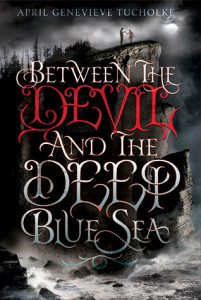 Between the Devil and the Deep Blue Sea

In the haunted, sleepy little town of Echo, a visitor comes, washing the town with a twisted and terrifying mystery.

Violet lives in the boring seaside town of Echo, a small town where everyone knows your name and your family, as well as your family’s secrets. It’s the sort of place where the echoes of the past haunt your todays.

Violet and her brother were brought up by eccentric, artistic parents who abandoned their kids to study art in Paris, leaving them t to fend for themselves in a run- down sea-side mansion. Once dignified and elegant, it now stands sea bitten, overgrown and severally neglected. Although it seems like every child’s dream to live alone, the reality of it quickly comes crashing down on Violet and her brother Luke.

When faced with the fact that they are quickly running out of money, Violet puts out an ad to rent the guesthouse, and that’s where charming, handsome and enigmatic River West comes to stay. He brings with him an air of wonder and enchantment, masking a sense of fear and impending doom. Before anyone knows it, the town’s legend of kidnappers and monsters come alive, where children sleep in the cemetery waiting in the sea mist fog for the devil himself. When gruesome murders start to occur in nearby cities, no one is safe as the murders creep in to Echo. Fear begins to claw its way to the surface as murderous blood begins to pour upon the city streets, with crimes so sinister only the devil himself can be blamed.

Before Violet realizes, she is pulled into River’s manipulative pull, swept up in love, leaving her open and vulnerable just like River wants. Enamored by River’s illusion, Violet quickly ignores his lying, distrustful nature, falling for the blissful promises his alluring glow can offer, a secret and an illusion that can lure you in like the gnashing white tooth devil himself.  This throws Violet into a blinded lust that washes away any sense of danger and takes her on a journey that slashes through the deepest part of her heart, forcing her to decide if love can reside where there also is evil, and if so, could that make her wicked as well?

April Genevieve Tucholke seduces you with a chilling storyline, which gently rocks you back and forth, lulling you in like a lullaby. The story back-builds like a wave, which crashes before you, dragging you under with its power.

Between the Devil and the Deep Blue Sea, is a gripping gothic horror unlike any other. From beginning to end it doesn’t disappoint. Only once it’s too late do you realize you are in the books under- tow, tumbling head over heels, throwing you into a world filled with mystery, magic, horror and pure wickedness.