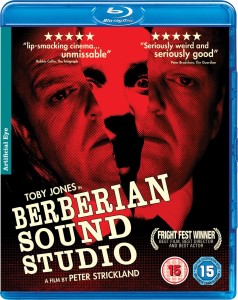 In the 1970’s a short, pudgy, meek, sound designer arrives at a small Italian film studio and prepares to begin work on a sleazy horror film. Immediately he is surrounded by an off putting and creepy atmosphere while the eyes and receptions of all who encounter him are cold and distrusting. Something sinister is in the air.

So begins the new film Berberian Sound Studio. There has been serious buzz surrounding the film since it premiered at the Edinburgh Film Festival early this year and I can tell you that the buzz is richly deserved.

Written and directed by British filmmaker Peter Strickland, the film pays homage to both the great Italian “Giallo” films and to the lost art of analogue sound. There are moments that tip the hat to Giallo masters such as Dario Argento, Leo Fulci, and Mario Bava, and other scenes which evoke the artistry of Brian De Palma’s 1981 masterpiece Blow Out.

In look and sound design, we have an almost “Lynchian” feel in the beginning with its unique use of shadows and darkness while keeping with the true atmosphere of a Giallo film. The darkness of the film studio is occasionally populated by powerful, bloody, red letters that spell SILENCIO as the crew go to work on the film. The almost brutal red in those letters pays homage to the stark red blood in the Italian Giallo films of the 70’s. There is a strange and playful twistiness that combines with a brutality that is constantly lingering just beneath the surface of the film and its characters. Cinematographer Nicholas D. Knowland deserves high praise for the film’s 70’s retro look and feel.

Character actor extraordinaire Toby Jones plays a British sound designer who is flown to Italy to do the sound for an extremely violent horror film that has become quite the troubled production. Jones’ character is quite shocked when he realizes the type of film he is to be involved with, as he has done mostly children’s television back in the U.K. The grumpy producer describes it as an “equestrian” film about a woman who “no longer rides her horse” but he soon discovers it to be a gory horror film about satanic violence and witchcraft. He is truly appalled by what he sees.

We watch as Jones looks on in terror and disgust at the atmosphere of on screen torment coming from the film as he is forced to find the perfect sound for such moments as hair being ripped from a head, knives being plunged into flesh, and the sequence that begins to push his character over the edge, an axe being plunged into the vagina of a possessed witch.

One of the more interesting things about our film is that we never see one frame of the “film within a film” that they are working on. We only here the description of the scenes and watch as the actors search for the perfect screams in the sound booth. Director Strickland uses aural representations to give the “film within a film” shape in the watcher’s minds. It is a bold move that works perfectly.

Jones’ character is out of his depth and, surrounded by creepy atmosphere and stuck alone in a country where he is very much a stranger, the lines between what is real and what is a movie become blurred to him and he begins to lose his grip on his own sanity.

Toby Jones gives a great performance here and buoys the film. He reminds us of Roman Polanski’s weird turn in his own thriller The Tenant. It is a performance that recalls the great silent film actors, as Jones uses facial expression rather than extensive dialogue to portray his characters every emotion. His win for Best Actor at the British Independent Film Awards earlier this year is a testament to his pitch perfect performance.

Another reason the film works so well is the brilliantly retro score by the English electronic band Broadcast. The director hired them to write only the score for the “film within the film” but he liked their music so much that he used them for the entire score. Their electronic and moody music is almost another character and lends itself beautifully to the Giallo atmosphere created by the filmmakers. There are moments that perfectly echo the horror works from genre mainstays Ennio Morricone and Goblin. It is a terrific score.

At times the film seems to unfold as a puzzle as the filmmakers give us altered takes on moments we have just seen but, by the end of the film, we are left to our own devices in figuring out what the meaning of it all is. This is where the film falters a bit but not enough to ruin what has come before. The ending is a bit too ambiguous and, I believe, too metaphorically aloof to be completely satisfying. It is rather anti-climactic compared with the rest of the movie. For me, the “wrap up” is the only downside to this very, very, good film.

As with the Giallo genre itself, filmgoers will be divided. Many will find it overly gruesome, pretentious and slow but I hope that most will see it for the gem of a film it is. Director Strickland respects the styles and films he is paying homage to while making his own original work. It is both art film and horror film and except for the final few moments it succeeds on both levels. Berberian Sound Studio is a fascinatingly twisted and macabre tour de force.