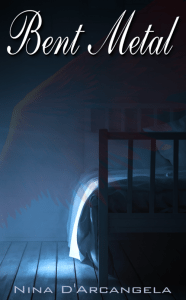 The story begins in medias res: Lauren, the spunky teenage protagonist, hears the tell-tale sound of a car crash from her bedroom window.  She goes to check on her sickly younger brother, Alan, only to find that his bed is empty.  She has continuously been haunted by fears and nightmares regarding Alan’s fragile state.  Furthermore, Alan is a habitual sleep-walker, and the front door is ajar.

D’Arcangela knows her horror paradigms–from the fleeting shadows,  to the recurring nightmares,  to the “gaslighting” affect in the sense that every other character makes the protagonist feel she is living a dream within a dream—Bent Metal manages to touch on them all without submitting to cliché.  Bent Metal is a short story, yet has a fully realized plot full of foreboding.  I was engaged from the very first line and read the story in one sitting (this from a woman whose life is typically full of interruptions).   At times, I was overly confident in my ability to predict the outcome.  D’Arcangela provided twists and turns that were delightfully misleading.  Without giving anything away, I found the ending to be a lovely culmination of the weird and eerie trail I had been following.

The writing is crisp and concise and would be appropriate for either a YA or an adult audience.  There is nothing that goes beyond a PG rating, yet the story is creepy enough to entertain even the most weathered horror fan.  As the days are turning colder, I highly recommend Bent Metal for a spooky fireside read.