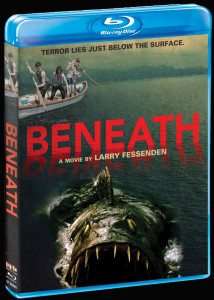 The amazing Scream Factory excels at putting out horror classics and cult favorites from the 70s and 80s on Blu-ray, making them look better than they ever have before, and packing them full of special features. And then, occasionally, Scream Factory puts out a new release, and sadly, most of them have been pretty damn bad. The reason for that, by and large, is because most of their new stuff has come from Chiller Television, the horror-centric arm of the same company that produces the SyFy Channel. And if you know anything about SyFy original movies, then you know how God-awful most of them are, and the ones from Chiller, looking like they were made for half the budget that the SyFy flicks get, are even worse.  Yes, really. So when I got this new Blu-ray in for review, to say my expectations were in the basement would have been an accurate statement. Reading the synopsis on the back of the case didn’t help matters any. Beneath is a flick about some kids in a boat being menaced by a killer fish. Not a shark. No an alligator. Not a crocodile. Not a floating, black mass of man-eating goop. Nope, a fish. Oh joy.

But then, as I watched, things started looking up for this film and for me, the one forced to watch it. The first thing that lifted my hopes up was the directing credit by Larry Fessenden. Larry has directed some very good things, such as: 2001’s Wendigo and the wendigo-themed (and best) episode of the short lived 2008 TV show, Fear Itself called “Skin and Bones.” What can I say, I’m a sucker for anything that deals with the wendigo legend, and I guess so is Mr. Fessenden. So that gave me a small glimmer of hope.

Then there was the movie itself. You could tell someone with some skill was behind the camera, a rarity for something produced by Chiller or SyFy. The acting, while nothing to write home about, was at least competent. As for the story, it’s pretty basic. A group of kids go out to the woods for some teenage fun. In order to get to their party destination, they must cross a lake in a little rowboat, and therein lies the problem, as this lake has a huge, man-munching fish in it. Now, where did this freaky fish come from, why does one of the kids who knows that the killer fish is there still brings his friends out there, and how does that kid’s magic amulet keeps him safe from the hungry fishy, are all questions that go largely unanswered. There are some hints given, such as the kid that knows about the giant fish might have had ulterior motives behind him bringing his friends out there, but it must be said that even the hints seem weak.

Before you can say “didn’t I see this in Creepshow 2?” the killer fish eats the boat’s oars, and snaps at anyone that tries to paddle the little dingy to safety, effectively rendering the 5 kids dead in the water. Naturally, if that was all there was to this movie, it wouldn’t be enough for a feature film. See the aforementioned Creepshow 2 segment “The Raft” that told the same story in about 20 minutes. So you soon get the people turning on each other thing that you just knew was coming. The five stranded people start playing the old game of “who do we chuck over the side so we can paddle a little closer to shore?” Now this bit of drama seemed very forced and only left me rolling my eyes every time they did it. I mean these kids turn on each other in record time, which seems a tad unbelievable, especially when you stop to consider that they’re not even random strangers, they’re supposed to be friends or even family. It also doesn’t help things much that when someone says “Oh we’re never going to make it to land, we’re going to die out here!” the camera accidently shows time and time again that the shore behind them is about 20 yards away. I keep wanting to tell them to turn the hell around, but alas, they never think to do that. As for the killer fish, it’s a bit goofy looking. It’s sort of like a giant, mutant catfish with fangs. But, it is used pretty well. It’s essentially an ever present threat that only exists to turn the characters into murderous A-holes.

On to the extras and goodies on this new Blu-ray. There’s a pretty good audio commentary from director Larry Fessenden and a decent “Making of the ‘Fish Movie’” featurette. There’s an interview with Fessenden about his thoughts on the movie, Jaws. There is a little bit they took from the internet called “What the Zeke?” that, like many things on the internet, seemed rather pointless, and a short featurette called “What’s in Black Lake?” A theatrical trailer (can it still be called “theatrical” if the movie never made it to theaters?) round out the extras.

So is Beneath a good catch, or just a release? Well, it’s nothing amazing, and not as good as some of Larry Fessenden’s other work, but it’s not bad and is, by far, the best thing I’ve seen to come out from Chiller TV. It’s a decent monster movie, even if the character become bloodthirsty douchebags far too quickly. If you’re a fan of water-based horror flicks, or when nature attacks movies, give Beneath a try. Consider it moderately recommended.