Been Curious About ‘The Rockabye Worm’? 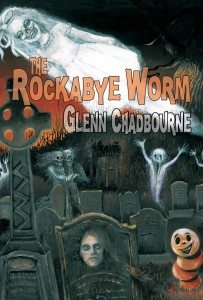 BIRMINGHAM, UK, November 14, 2014 – Short, Scary Tales Publications (SST Publications) owner, Paul Fry is excited to announce that SST is now taking pre-orders for The Rockabye Worm by Glenn Chadbourne. The book is a delightful tale about a little worm’s fight for survival and is gorgeously illustrated by Glenn in his trademark pen & ink style. SST is publishing the book as a Trade Hardcover edition and also as a limited Signed & Lettered Remarqued Edition. The trade edition will be released on November 30th and the remarqued edition will be available early 2015. There will be only 52 signed, lettered & remarqued copies that will include an original hand-drawn full colour picture by Glenn Chadbourne which will make each copy very unique and collectible.

About the Author: “Glenn Chadbourne is a freelance artist specializing in the horror/dark fantasy genres. His work has appeared in over fifty books as well as numerous comics and magazines and has accompanied the written works of the genre’s top authors. Among them Stephen King, where Chadbourne illustrated the two volume set The Secretary of Dreams and most recently King’s The Dark Man. Chadbourne was the Artist Guest of Honor at the World Horror Convention in New Orleans in 2013 and continues to work daily in the genre he holds most dear. He lives in Newcastle, Maine with his wife Sheila and their Boston Terrier, Evan.”