Bedlam Stories Combines Oz and Wonderland in a Most Frightening Manner 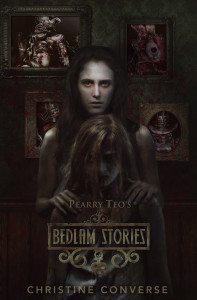 If you like the Wizard of Oz and Alice in Wonderland…heck, even if you don’t…you’re not going to want to miss the Christine Converse’s new novel, Bedlam Stories.  Check it out.

Set in the 1920s, intrepid reporter Nellie Bly fakes insanity to gain admission into the infamous Bedlam Asylum. While researching her expose, Nellie meets a young patient, Dorothy, who has delusions of a fantasy land she calls “Oz”.

Nellie is determined not to let Dorothy share Alice’s fate as a human guinea pig. But the horrific experiments open a portal to these other worlds.

When the dark and twisted inhabitants of Oz and Wonderland clash for control, Nellie realizes that they aren’t delusions at all – they are terrifyingly real.

There’s even more info in the accompanying press release:

For complete information about Bedlam Stories – The Novel: www.bedlamstories.com

This horror novel set in the 1920’s centers around beloved childhood characters Dorothy Gale from The Wizard of Oz and Alice Liddell from Alice in Wonderland. As they undergo a series of human experiments in Bedlam Asylum, their fantasy worlds become distorted and terrifyingly real. What happens when their two worlds collide will go beyond your wildest imagination.   Bedlam Stories is a franchise unlike any other. With a strong grassroots campaign aimed primarily for a small niche market, award winning horror director Pearry Teo (Necromentia, Dead Inside, Dracula) has, once again, captured an audience of loyal Bedlam Fans (called
Dreamers). Their support will help launch this novel even further into the depths of technology with an android app and movie.

The Bedlam Stories Facebook page has engaged with many fans of both Alice in Wonderland and Wizard of Oz, introducing them to the dark, twisted world inside Bedlam Asylum. The Facebook fan page is the hub for like-minded lovers of horror in movies and literature. Special offers are being announced on the website site for members and fans. This includes The Limited Gold Signature Edition of Bedlam Stories (available for pre-order only) and a free download of Project Alice: The Untold Story, the eBook that chronicles the backstory of the doomed Project: Alice.

About The Authors
Christine Converse, author, is an accomplished writer, who has written under the pen name Christine Cain, for video game strategy guides such as Resident Evil and Bladerunner. She has also written for numerous magazines and published multiple books for video games.

Renowned photographer and designer, Chad Michael Ward’s art sets the theme for the dark world of Bedlam Stories. The website not only offers information and excerpts from the book, but a special members’ area to view Chad’s work as well as download the original eBooks of The Wizard of Oz and Alice in Wonderland.