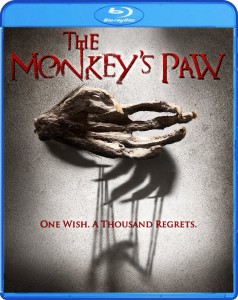 Normally, when I see the words “Chiller Films”, telling me that the movie I’m about to watch was made for the SyFy Channel’s little brother station, Chiller, I am filled with fear, but not for the right reasons. Just like SyFy, Chiller has made a series of original movies on shoestring budgets and with about a tenth of talent that Roger Corman used back in the day. So yeah, I was not looking forward to my time with this latest offering from the terror TV channel. The fact that it was yet another retelling of a famous story that’s over one hundred years old and has already been made into at least a dozen movies, shorts, and was even parodied on The Simpsons, didn’t exactly fill me with hope. So was this latest version of this classic story a wish come true, or a forgettable nightmare of a movie? Well there’s only one way to find out, and it won’t take us three tries to get it right.

Look, you all know this story. Some guy gets a magical monkey’s paw that grants three wishes. However, living up to the old adage of be careful what you wish for, every wish comes with an unexpected, and horrible, twist. So each wish the protagonist makes only gets them into deeper and deeper trouble. And basically that’s the same story here. However, the filmmakers here have wisely decided to take that story and change it a little, to add some much needed difference to that well-known plot. I won’t give away how they change things, but I will say that for the most part, their additions work.

Another good idea was the hiring of Stephen Lang. Mr. Lang is perhaps still best known as the badass military commander in James Cameron’s Avatar. Here he plays a similar badass with scene-chewing relish and is easily the best thing about the movie. That’s not to say that the rest of the cast is bad, only that Stephen Lang is so good at being bad. Another highlight, at least for the gorehounds out there, are a number of meaty, graphic kills that are all well done. Last, but not least, is the direction by Brett Simmons, that shows real style and skill, something that is sadly lacking from most SyFy/Chiller movies.

The new Blu-ray from Scream Factory only comes with a few special features, but I know much larger cable stations, that when they release movies on disc, they don’t bother with any, so I’m happy there are some on here. They include an audio commentary with director Brett Simmons, cinematographer Scott Winig, and actor C.J. Thomas. There is a look behind the scenes featurette and a theatrical trailer.

So Chiller’s new The Monkey’s Paw was much better than I thought it would be, and maybe then it had any right to be. It takes a slightly different approach to the venerable horror story, and that was a wise decision. If you want to experience that old story again, or maybe for the first time, then this version is a good telling of it, and a pretty good movie besides. Consider it recommended.