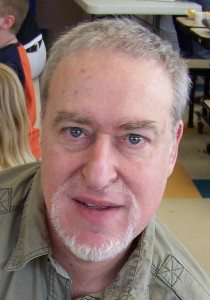 Rick Hipson recently had a chance to sit down with Barry Hoffmann and talk shop about his work and what direction he plans on going in the future.
HELL NOTES:  With so much of the characters from your Eyes’ series about to be wrapped up with one more book to come following this latest offering, what do you think fans of the series might find most unexpected as they delve into Blind Vengeance?

BARRY HOFFMANN:  I think the most surprising aspect of the book is the human manifestation of the forest. I’d spoil the plot if I went into details, but that the forest can manifest itself in human form is a game changer. And Renee’s cat and mouse game with her kidnapper gives her more depth.

HL:  Did you have any strategies for keeping track of how your character’s evolved from one book to the next to ensure the most realism and consistency?

Hl:  Readers who’ve kept up with your work will remember Shara from earlier days.  Where did Shara first introduce herself to you and what is it that makes her so enduring?

BH:  Shara makes her first appearance in what was to be a stand-alone novel HUNGRY EYES. The plot was one of those “taken from the headlines” — a girl who was kidnapped by a neighbor, abused and hidden in a basement for several days that the police searched repeatedly before finding her. The premise of HUNGRY EYES is what would happen to this teenager ten years down the line. Due to the trauma Shara suffered she was haunted by the person who was behind the kidnapping but never brought to justice. She became a serial killer with her tormentor meant to be her last victim. When I decided to write a sequel I was faced with the problem of changing Shara from an antagonist to a protagonist. I wanted her to be the main character of the series, as opposed to Deidre Caffrey, a reporter who was the protagonist in HUNGRY EYES. I felt that Shara had far more strength and complexity than Deidre and I wanted to explore just what made her tick and how she would evolve when she no longer had to face the threat of her tormentor. So, I guess it was when I decided to write EYES OF PREY that I really began to delve into Shara’s character.

HL:  As much as Blind Vengeance stands well on its own merit regardless of knowledge from the first books in the Eyes series, did you find it a difficult balance between informing readers of past references and keeping this one moving forward of its own accord?

BH:  I think the biggest problem in writing a series is providing new readers with enough backstory so they aren’t totally confused. At the same time I didn’t want to spend too much time on the backstory as I had to move forward. I think I provide just enough information so a new reader doesn’t get confused. What also helps is that some characters who were important in the first books of the series become secondary or peripheral characters as the series progresses. I don’t have to provide too much information about those characters. This way I can introduce new characters into Shara’s world.

HL:  Do you find the reward and overall experience of writing a series as opposed to a few stand-alone books to differ much for you? Any pros vs cons to speak of?

BH:  I’ve written a number of stand-alone novels, but a number of times characters from one of those novels have beckoned to me to continue their story and I’ve heeded their call. In one three book series (there will be no fourth book . . . I think) in the first book I have one protagonist and as the book progresses a secondary character becomes more important. When I finished the book I decided that this secondary character merited a book where she was front and center. So, the second book switches the leads. The main character becomes a secondary actor, so to speak, and the original secondary character takes the lead. In the third book I wanted to tie up a number of plot points so the original main character again takes the lead. I enjoy writing both stand-alone novels and a series, though only the EYES series is six books in length. In one two-book series I wrote the first and didn’t write the second until I’d written three or four other novels. I was just intrigued with the characters in the first book and finally decided to revisit them. I also have some characters from stand-alone books make cameo appearances in other books.

The biggest problem with a series (no matter how long or short it is) is to further flesh out the main character from book to book. With the EYES series in an afterword to BLIND VENGEANCE I hint that in the final book another character will become as important as Shara. With BLIND VENGEANCE I felt that Shara was fleshed out with little else to add. Another character, not as fully developed, becomes the lead in the final book. And, in the final book I’ve added a novella where Shara hardly appears with this new character taking the lead. If I were to continue the series this character would be the new lead with Shara being important, but a secondary player. I think that in too many series a main character becomes stale. Just how much can a character evolve in the tenth or twentieth book in a series? I don’t want to go there as my novels are character based.

HL:  In the afterward of Blind vengeance, you mentioned you are currently working on the sixth and final book of the Eyes’ series. What can you tell us about how the next installment is shaping up?

BH:  Well, I mentioned above that another character becomes more significant in BLIND RAGE, the last book in the series. I came up with the plot for the book from a series of articles I ran in Gauntlet magazine, which I published. The magazine dealt with censorship and in one issue I focused on the thorny issue of photographers like Jock Sturges and Sally Mann who took nude pictures of minors and published them. It was clear to me that this wasn’t pornography. These were art books. BUT, I did question whether a child (whether 10 or 15) could make an informed decision as to whether such intimate and provacative photos should be published. My personal opinion was that these artists could take the pictures but should wait until the subject was sixteen and could make an informed decision. Years later this issue was still tugging at me and became the plot for the final book in the EYES series. A female photographer has published a number of books with her children as her subject. She is exploring, from book to book, the sexual awakening of her children. One of the children dies and the mother is convicted of her murder. Another of her children comes to Shara with material she has just uncovered (after her mother’s conviction) and asks Shara to investigate whether her mother might be innocent. The story takes off from there.

HL:  Aside from Shara who is obviously the driving force behind the entire Eyes’ series, which character or characters do you think you’ll miss the most and why?

BH:  I’ll miss both Alexis and Renee. Alexis first appears in EYES OF PREY, the second book in the series. I found her a compelling character. Renee makes her first appearance in JUDAS EYES, the third book in the series. She has a minor role in that book but near the end Shara becomes her legal guardian. She’s also a complex character and is pivotal in BLIND VENGEANCE. I’ll also miss Briggs who as the series ends is still unaware his one-time partner in bounty hunting is the woman he unsuccessfully tried to bring to justice in HUNGRY EYES.

HL:  Once the series is wrapped with the completion of the fifth, where do you see your muse drifting too next?

BH:  As I’ve explained above I’ve written a number of novels since I completed BLIND RAGE. The problem I faced with the EYES series was that two publishers who were going to release the book went belly-up, each after holding the books hostage for several years. I wasn’t about to sit around and not write while trying to find a publisher for the series. So, as I’ve mentioned above I’ve written several stand-alone novels and a series of two and another three books in length. I also wrote my YA Shamra Chronicles trilogy which has seen publication. I’ve just completed a novel revolving around human sex trafficking. In my novel BORN BAD I created my favorite villain and made the mistake of killing her off. I wanted to revisit her and wrote a novella with Shanicha appearing in a prequel to BORN BAD. I still wanted to create other complex villains and in my most recent novel I came up with a character equal to Shanicha. I made sure not to kill her off just in case I want to revisit her in the future. I have several plot ideas battling one another right now and I think whichever I choose will be a stand-alone novel with new characters.

HL:  To change gears a bit, do you find there to be any significant parallels between your publishing life and your writing life, perhaps some perspective from either side that helps contribute to your success with one or the other?

BH:  Most definitely. I only publish books that I believe are well written. I’ve learned more than I can describe from reading (and then publishing) the works of Richard Matheson, Ray Bradbury and F. Paul Wilson (to name just a few). I loved Matheson’s minimalist style and he was an influence to me long before I published him. Bradbury’s writing was incredibly poetic and while I’ll never approach his ability to use words he was also a great influence to me. And, F. Paul Wilson’s Repairman Jack series helped me in creating the EYES series. He’s kept Jack fresh while advancing the arc of his Adversary series. I’ve also read books (I won’t mention any names as whether a book is well written or not is in the eyes of the beholder) I thought were poorly written. Those, too, were instructive. I didn’t publish them, but I did consider doing so until I read the book. An author can learn something from a poorly written novel.

HL:  And finally, which projects might you have in the works that you’re most looking forward to unleashing for all your readers to enjoy?

BH:  I think I answered this above. The two book series features two doppelgangers and a very complex male antagonist. Since most of my antagonists and protagonists are female I think readers will find this character compelling. He evokes both sympathy and disdain. And the three book series where the lead character changes in the second book is also one of my favorites. I think readers will also enjoy the BORN BAD prequel. Shanicha turns out to be even more complex than she was in BORN BAD.