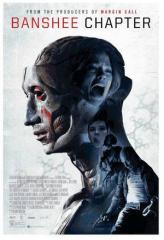 During the cold war, an intelligence branch of the United States government known as the CIA became heavily engaged in programs dedicated to mind and thought control – the largest of which is now universally known MKUltra. In this secret project, the US government used normal citizens – habitually without the individuals consent – to test a wide range of psychotropic drugs … in particular LSD. Though the authoritarian experiments here were frightening enough in and of themselves, even more alarming is the never documented human cost: the men and women who vanished into the ether suffering psychosis, delusions, insanity, and everything in between. Just what stories will the general public never know? What waking visions and nightmares were some of these people privy to?

With such a rich store of historical data here up for grabs, it was only a matter of time before somebody tried to mine it fictitiously on celluloid. Not only has first time director Blair Erikson done just that, he has taken the above elements and fused them with a score of other motifs including HP Lovecraft (in particular his story The Beyond), experimental radio broadcasting, and real life characters fictionalized for the purpose of storytelling. On paper this seems like a heady mix – one that could ultimately implode. But Banshee Chapter comes equipped with just enough unique sophistication and snatches of brilliance that at times the viewer will be left reeling.

Make no mistake; this is a ‘footage’ film. But ‘found footage’ has, thankfully, been left off the menu. What we have instead is a kind of a hybrid excursion inter-spliced with genuinely creepy stock recordings of real and fictionalized MKULtra experiments.

Present day, and James Hirsch has decided to take an old school MKULtra concoction himself … and film the proceedings. With his friend at the camera’s helm, it isn’t long before a sinister radio-broadcast takes up a chorus – along with an all pervading malaise that something altogether alien is just outside the door and homing in on James’s thoughts. After James’s mysterious disappearance, it then falls to his old college friend Anne to pick up the pieces. A present day reporter, Anne remains at the crux of the narrative – guided by a desire not only to find James but to unravel some of the evidence acquired.

And it’s this evidence that leads her to counter culture writer Thomas Blackburn – a fictitious rendering of author Hunter S. Thompson. Though at first Blackburn’s character feels somewhat unnecessary – if only because of the real life writer’s ardent worship – a viewer will slowly acclimatize: Hunter S Thompson, for all his eccentricity, was a man deeply rooted in the milieu on offer in Banshee Chapter: CIA investigations, hippy subculture, and a deep seeded paranoia of authority. After ingesting the drug herself, Thomas and Anne are led on a pursuit for answers … and chase where monsters from another realm are always peeking just around the corner.

While some might be turned off by the low budget, we have at our core here a film made with great care. Not only are jump scares prevalent, but there is a whole elusive quality to proceedings that was such a pertinent part of Lovecraft’s work. The monsters – though intangible – haunt the narrative through subtle images and a radio broadcast that will haunt your dreams. Throw in the ‘true life factor’ and we have a film that will eventually go on to become a cult classic.