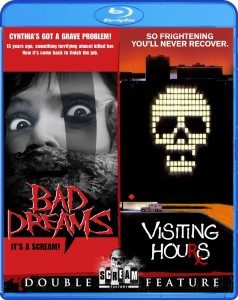 This two pack has existed from Shout! Factory for a while on DVD, but now both of these flicks are getting released on Blu-ray for the first time from Shout!’s amazing horror imprint, Scream Factory. Is this two-for-one package worth the upgrade? What about if you’ve never seen either of these movies, is this even worth a get in any format? Well we’ve got a couple of hospitals to visit, so pop come vitamin C and don’t forget your Purell. You don’t want to catch anything here, least of all…your death!

Sorry, that was pretty cheesy, but then, so is the first film of this double feature, Bad Dreams. Here, let me describe it to you. There’s a burnt-faced killer that stalks teens in their dreams, including a group of troubled kids in an insane asylum. Does that sound familiar? Could that be A Nightmare on Elm Street, or more specifically Part 3 of that series? Well surprise, that’s actually a little remembered fright flick from 1988 called Bad Dreams. Yeah I know, it’s weird, and perhaps even a little bit slimy, and things only get more muddled when the star of Bad Dreams film was first in The Dream Warriors as the badass punker chick, Taryn. So if you experience a sense of déjà vu while watching this movie, don’t worry, that’s intentional.

Anyway, standing in for Freddy Kruger, you get psycho cult leader, Harris, played well by perennial villain, Richard Lynch. Harris led a doomsday cult some years back who got it into their heads that dousing themselves in gasoline and flicking a Bic would be a great idea. Only one young girl, Cynthia (Jennifer Rubin) survived the inferno. Too bad for her that fried-faced Harris still wants her to burn. So he begins to haunt her dreams, and the dreams of her new friends in a teen-centric asylum. One by one the kids start to off themselves thanks to Harris’ scare tactics, until it’s just Cynthia and the bogyman remaining. Yet things may not be what they seem. There is a neat little twist to this tale that some people either love or hate. Me, I liked it because at least it doesn’t appear to be a total rip off of the Elm Street series.

Bad Dreams is a fine little film, not great, but enjoyable. The direction is competent, the story moves along at a brisk pace, and the characters are fun.  Jennifer Rubin is great as frightened little bunny Cynthia, but my favorite is Ralph, played by Dean Cameron, perhaps best known as the horror loving Chainsaw in the Mark Harmon 1987 vehicle; Summer School. He plays the same kind of whacky and “crazy” guy here, and in both films I really dug him. The special effects are effective and should make the gorehounds happy, and as I mentioned before, the twist at the end is pretty good, or at least better than the last five M. Night Shyamalan films combined. Oh, and it has just the right amount of cheesy 80s horror flavor that I always love, so Bad Dreams gets a nod of approval from me.

On to Visiting Hours which is sort of like a slasher flick, but far more of a thriller. It’s about a woman hating psycho with anger issues towards women attacking an opinionated female journalist. When he hears later that she survived his attack and is now resting in a hospital, the nut job goes to the hospital time and time again to finish what he started.

The highlight in his film is easily gravely-voiced, steely-eyed, professional bad guy; Michael Ironside. He growls, snarls, spits, and chews his way through the scenery whenever he’s on screen and is totally believable as an unhinged madman. Less good is William…Shatner…who…plays…the…reporter’s…boyfriend. Here Captain Kirk appear content to phone in his performance, or perhaps he’s just really bored. While this movie has a far more measured pace than they typical slasher flick, when things happen in this film, they’re usually pretty good. This one is well worth watching, if just to see Michael Ironside do what he does best, and that’s be bad.

Now unlike most combo Blu-rays, Scream Factory actually included a nice collection of special features on this set, some of which are brand new to this release. Bad Dreams has a director’s commentary, a featurette on the cast of the movie that runs 21 minutes, a very short featurette on the special effects, nine minutes of behind the scene footage, the original ending, a promo reel, photo gallery, and a trailer. Visiting Hours gets three interviews with writer Brian Taggert, producer Pierre David, and actress Lenore Zann. All together, these interviews run over an hour and 20 minutes. These are followed by radio spots, TV spots, and a photo gallery.

So if you are missing either, or most likely both, of these movies in your library, then you should pick them up if you’re a fan 80s fright flicks. If you already have the previous DVD combo pack, should you get this upgrade? Well this Blu-ray does look much better than the DVD and there are a few more special features on here. So consider this one recommended.