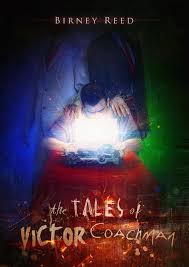 Bad Dream Entertainment is proud to announce the upcoming release of our first mass-market title, The Tales of Victor Coachman from short fiction writer Birney Reed. In this ‘meta collection’ of dark urban fantasy, a series of loosely tied tales of dark fiction and supernatural encounters are strung together as the work of fictional writer Victor Coachman. But it is not just his stories themselves that are presented in this book, but their consequences for both the writer and his fate.

From the Written Page…To the Real World
Victor Coachman strives to write stories about ‘real people’, but just how far into reality does his pen reach? As he creates tales of mystery, fantasy, and the supernatural he must wrestle with the thin veil that separates them from the real world once they are published. But does his ability to blur the lines between fiction and life attract the attention of powers even greater than his own?
Explore thirteen original and unpublished stories of urban fantasy from author Birney Reed as he introduces readers to a fictional writer caught between two forces vying for his otherworldly talents. Dark mysteries, broken characters, and hard lives complete this gritty meta collection of short fiction.

The Tales of Victor Coachman is a single author collection presenting 13 original stories of modern fantasy, horror, and the supernatural from Birney Reed, collected in print for the first time. The book, BDE’s first foray into traditional publishing, will be available both digitally and in print on October 28th 2014 through all major retailers. This is our first big step outside publishing short fiction online, and we could not be happier to be working with Birney, one of the original authors to be featured on Bad Dream Entertainment after our launch late last year. He’s got quite a few dark little corners in his imagination, and his take on dark contemporary fantasy is a perfect fit for us. The book also features some great illustration and design work by the extremely talented Spanish surrealist artist Mario Nevado. Be sure to check out both his site and his gallery on Deviantart, he’s done some amazing artwork and we are thrilled to be working with him on The Tales of Victor Coachman.

As a self proclaimed “jack of all trades” and master of none, Birney Reed has worked as a dishwasher, an actor, singer, truck driver, short order cook, bartender, salesperson and CEO of a successful advertising firm. He took up writing 15 years ago, all because of a book he had just finished reading and a picture window he happened to throw it through.