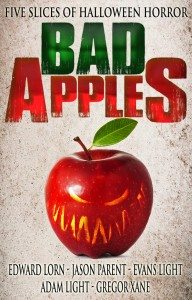 It’s almost Halloween. The nights are getting longer, there’s a dark chill in the air, and the lines between worlds are cracking. From somewhere within those cracks lurks Bad Apples: Five Slices of Halloween Horror, a five-author anthology beckoning you to lose yourself in its pages.

Gregor Xane’s “The Wriggle Twins” is a morbid, twisted, darkly whimsical tale of two very special children. These two live on their own and only come out to play on Halloween, but when they do, you’ll want to be as far away as possible. The kids are seeking offerings for their paranormal benefactor, and it’s not candy he collects.

Evans Light’s “Pumpkinhead Ted” is a classic revenge tale that pits an unfortunate deformed boy against a group of vicious bullies. It’s a high-caliber gross-out at times, and the moral middle ground it takes with the characters adds to its horrific quality.

Adam Light’s “Ghost Light Road”, despite its title, is a darker and bleaker story than the ones before it. Supernatural slasher film junkies will get their fix here, as a group of thrill-seekers become prey in an isolated house, and an urban legend evolves and adapts to modern times.

Jason Parent’s “Easy Pickings” returns to the bullying theme, as two friends decide to pick on a younger boy, not realizing that his invisible friend isn’t so imaginary after all. Once the tables turn, games of tag and hide-and-seek become life or death affairs.

Edward Lorn’s “The Scare Rows” ends the collection, and it’s far different from any of the preceding stories. A mysterious man walks into a small town and sets it abuzz in anticipation of an event no one can quite describe. The direction this goes is unexpected and very explicit, in both violence and sex, but it’s tongue-in-cheek the whole way through.

It’s clear that each author included here has a love for the horror genre in its many facets, and for Halloween in particular. The descriptions of its sights, smells and sounds are spot-on. The stories are thrilling and chilling and nostalgic in all the right places, and they all hold that indefinable magic that so many associate with that inimitable evening. There are no highlights here. These stories are excellent across the board. Bad Apples is a welcome addition to the genre, and one that you can come back to year after year when autumnal darkness descends. Recommended.