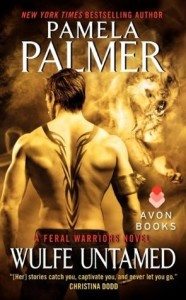 In 2009, New York Times bestselling author Pamela Palmer introduced an amazing urban fantasy series.  The series, which began with Desire Untamed, will end in February 2014 with the eighth and final installment, WULFE UNTAMED.  Pamela was apologetic, but firm, when she told her publisher: “I’ve always known how the Ferals’ story ended, but I didn’t know how many books it would take to tell it. As I started writing book eight, I realized the story was rushing to its climactic ending and it was going to happen in that book. I also realized that it wasn’t Grizz’s story, as I thought it was, but Wulfe’s. Authors like to pretend we control the story, but the story calls the shots. And that’s the way it should be!”  There was some wailing, some gnashing of fangs.  But, looking on the bright side: we’ve been waiting five long years for Wulfe’s tale!

Wulfe is among the most mysterious of the Feral Warriors.  Mated long ago to the previous Radiant, he was severed brutally and eternally from his young love.  The experience still scars him, figuratively and quite literally.  But, as the Therian race slowly dwindled out of existence, and few spirit animals remained strong on earth and in spirit, Wulfe has carried on for centuries.  But now, the end-game is approaching.  The Mage are preparing to free the Daemon plague and Wulfe’s own small strain of Daemon heritage has been awakened. Worse yet, the beautiful human he once rescued needs saving again. Though Mage sentinels are the ones after Natalie Cash, Wulfe knows his heart is what she really should watch out for. He’ll do everything he can to protect her…and keep his distance.  Running for her life while trying not to fall for this gentle, wounded warrior, Natalie’s world’s been turned upside down. But when the Mage begin to free the Daemons, it becomes clear that the Ferals’ only chance of defeating them is for Wulfe to use Natalie to harness the dark forces-and risk becoming evil in the process.  The future of the world hangs in the balance, but can Wolfe endanger the woman he loves to save her?

Eons ago, before the rise of human civilization, two immortal races battled the Daemons for control of the earth. The Mage, or magic ones, and the Therians, the mighty shape-shifters. Though traditional enemies, the Mage and Therians banded together to overcome the High Daemon, Satanan, ending his reign of terror and destroying his armies. The cost of victory was high. To win that ultimate battle, both races were forced to mortgage nearly all their power. Only one Therian among each of the ancient lines of shape-shifters was left with the power of his animal. Nine remain. They are the Feral Warriors.