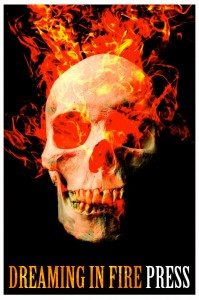 New York Times Bestselling author Tim Lebbon has launched his own ebook imprint.  Dreaming in Fire Press will be publishing a range of books from Tim’s back catalogue, and has launched with the novellas Whiteand In the Valley, Where Belladonna Grows.  More novellas will follow over the next few weeks, and he also hopes to release several novels.  At present the books are limited to Kindle, but they will be made available across all platforms in the future.  You can check out more details at Tim’s website www.timlebbon.net/dreaming-in-fire.’
The first six titles planned for release are:
White
Winner of British Fantasy Award
A cross between The Thing and Assault on Precinct 13, White is the story of a group of people under siege in an apocalyptic, frozen landscape. There things out in the snow that want to kill them … but they are also under siege from within.
In Perpetuity
(first published in Night Visions 11, Subterranean Press, 2004)
A father loses his child, plucked from his side on the street.  His search leads him to a sinister shop and its even more sinister shopkeeper.  The Keeper is holding the boy, and he tells the father he must find proof of love if he wants to see his son alive again.
But there are others out there, also looking for impossibilities to feed the Keeper’s bizarre hunger.  Some of them will steal to get their own loved ones back.  Some of them will kill.
Mannequin Man and the Plastic Bitch
(first published in my collection White and Other Tales of Ruin, Night Shade Press, 2003)
A futuristic story where the titular Mannequin Man falls in love with a sentient sex doll. He rescues her from her pimp, who sends soldiers after them. They flee through a violent, dystopian future landscape, falling in love, helping each other to survive, and hoping that their love might have the power to make things better. My publisher called it ‘a traditional love story’. It’s the only thing of mine my Mum read that made her say, “Oh Tim, can’t you write something normal?”
In the Valley, Where Belladonna Grows
(first published in Fourbodings, Cemetery Dance Publications, 2005)
A dark nightmare of solitude and rejection, pride and guilt, love found and lost. An apocalyptic vision from one woman’s damaged mind, this allegorical tale is for anyone who has ever felt alone.
A woman exists alone in a valley, happy, surviving, but all too aware that the dangers beyond her valley might yet come home to roost.
The Reach of Children
Winner of British Fantasy Award
Daniel is ten years old when his mother dies. She dies young, and with so much left to give. He does not understand. He cannot let her go.
After the funeral, his father begins talking to a large wooden box that suddenly appears beneath his bed. And when Daniel whispers to the box one day when his father goes out … it answers back.
It’s a voice he does not know. But this voice knows so much.
Vale of Blood Roses
(first published in After the War, Subterranean Press, 2008) … a (very) dark fantasy novella
A mercenary should be allowed to quit. That’s what Jakk thinks. But his companions don’t want to quit. As the Cataclysmic War ends they enter a valley that should not exist, see machines that should be dead, and interrupt something that should be left alone. There’s regret, but some actions can’t be undone. There’s hope, but it’s so obviously false. And there’s revenge.