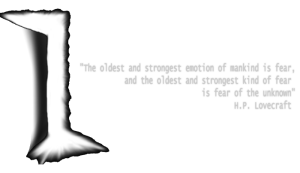 This just sounded too different, and too cool, to not pass it on to you.
From the website:
Vanished is an audio-only horror game for iPhone. In this game you’ll find yourself in a world without light, with no memories of how you got there and and no clues on why everything has disappeared.
Haunted by strange memories and surrounded by dark presences, you’ll realize that the only way to unveil the mysteries of this world will be to descend in the darkest depths of it.
The idea of this game came from an experiment on the hardware of the iPhone. With the help of built in compass and accelerometer we tried to imagine how to recreate the movements of a person in the real world, and from that we attempted to create an immersive experience that would’t need graphics.
You just hold your phone, face the direction you want to go and touch the screen to walk. To attack with you weapon simply shake the device. It’s as simple as that.
As you point the device in different directions, you’ll hear the world rotates around you. A monster is chasing you? Realize where it is and how to fight it with you ears and your imagination. Feel lost? Listen to the sounds that surround you and find the way out.
We think that imagination is the most powerful hardware a game needs, so we tried to develop something that is build totally around it. The game itself is only part of the experience. It’s your imagination that creates the world in witch you play. No graphic. No images. No walls.
It’s still an experiment, but soon we hope to expand the game and make it bigger. More complex. More deep. All this while leaving unchanged the simplicity of the gameplay.