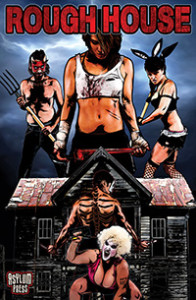 Rough House is a gritty, action-packed horror movie and comic book series that examines innocent victims thrown into a caged fighting match with deranged serial killers where they fight to the death.

Rough House combines the brutal ruckus of Fight Club, the twisted horror of The Texas Chainsaw Massacre and drapes it under a cloak of a government black ops conspiracy.

The story begins with an athletic young woman known only as “The Girl” who is kidnapped and thrown into a bizarre world of masked serial killers who torment their victims in brutal underground fights, backyard wrestling matches and deadly mixed martial arts bouts.  She soon proves herself able to hold her own in death matches against colorful masked killers with names like “Bone Job”, “Baby Fat, and “Skeeter the Devil Boy”. Once inside the Rough House ,“The Girl” uncovers dark secrets that possibly link her to a secret government program and to the fighters themselves. As “The Girl’s” psyche is worn down by brainwashing and psychotropic drugs, she becomes more and more of a stone cold killer herself. She must decide whether she will escape the Rough House or stay focused on her true target, the ringleader called “Big Daddy.”

Rough House is based on a story idea and trailer created by Mike L. Taylor of Pretend For Real Studios and a feature length screenplay written by Elizabeth J. Musgrave (Farmhouse, Darwin’s Pâté).

The project will be released as a digital first 4-issue comic book mini-series through Asylum Press and later in print as a graphic novel.

“I have a long history as a comic book artist and I am thrilled to see my movie concept brought to life on the comic book page,” says creator Mike L. Taylor. “We put together a great teaser trailer, we have a killer script and we’re in the process of doing storyboards and concept art for the film.”

“Mike gave me an outline and together we were able to create an interestingly warped world,” reveals writer Elizabeth J. Musgrave. “Each member of “Big Daddy’s” crew is a trained killer, but I tried to inject a tormented soul to each one.”

“We are excited to release this first glimpse into Rough House,” explains publisher Frank Forte. “It’s a dark, twisted tale that delves into what would happen if the victims in a slasher film were bad ass fighters themselves that could give the killers a run for their money…and show the viewer some brutal fight scenes in the process.  We also delve into MK-Ultra, The CIA, Black Ops and government conspiracies, it’s very twisted.”

ABOUT ASYLUM PRESS:
Asylum Press is a publishing company that produces premium comic books and graphic novels within the horror, science fiction, and action genres. Some of Asylum Press’ titles include Fearless Dawn, Warlash, Zombie Terrors, Undead Evil, EEEK!,Chopper and Asylum of Horrors. The books feature original, character-driven stories and cinematic artwork by top creators and newly discovered talent that will appeal to not only comic book fans, but also mainstream fiction readers who don’t normally buy comics. Asylum Press delivers its books via a bold new business model that focuses on digital publishing and new distribution outlets in both the American and international markets. Asylum Press is distributed by Diamond Comics Distributors, SCB Distributors, Ingram, and Baker & Taylor.  Distribution in the United Kingdom is handled by Turnaround Distribution.

ABOUT PRETEND FOR REAL STUDIOS:
Pretend For Real Studios is a digital effects and animation studio located in Burbank, CA. The studio is owned by Mike L. Taylor, a television director and DP whose credits include The Bachelor and Rock Of Love. Pretend For Real Studios have created music videos for Twiztid, Girls And Corpses magazine, and the Moonshine Bandits with over a million views combined.