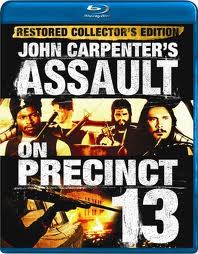 A couple of years before director John Carpenter became the famous (infamous?) master of horror by making Halloween, he really wanted to make a western as his second feature film. Unfortunately at the time, pretty much no one but him was interested in westerns. So he pulled a fast one, he made his western in the guise of a modern, gritty, urban, crime drama and called it Assault of Precinct 13. But make no mistake, it is every bit a western. Carpenter admits as much, claiming that it is his take on the classic cowboy movie, Rio Bravo. So yeah, it’s not a horror movie, but it is Grade-A cool, and it’s a movie by John freaking Carpenter, so it’s very worthy to be reviewed here, but should you get this new collector’s edition Blu-ray from Scream Factory? Well keep reading and find out.

This film is about a cop named Bishop who is overseeing the closing up of a police precinct in the middle of a rundown LA ghetto. This means that there is only a skeletal crew on hand. Then a bus transferring some prisoners stops in after one of the convicts start getting ill. So far there’s nothing too far out of the ordinary going on. But that will change, fast.

The local street gangs are in a murderous rage after some of their numbers were killed the night before by the cops. They thrill kill a little girl to test out some their new heavy duty firepower, which leads to the grief-stricken father of the little girl gunning down her murderer. This only enrages the gang more and they chase the fleeing father to the all but abandoned police station. Before you can say “uh-oh” the lights and phones are cut, the place is surrounded, there’s no chance of anyone coming to the precinct’s rescue, and a very violent siege begins. Now the cops and the cons must work together if they are to make it out of this assault alive.

Really, that’s about it. It’s a simple story with an intentional western feel. There are tough but fair good guys, bad guys with their own code of honor, and a murderous horde of savages hell bent on getting what they want. The film is not perfect, either on a technical or artistic level, as there are more than a few booboos here and some groan-inducing dialog. That said, it is more than competently made, the actors are nothing if not completely earnest, and while it takes some time to get the action going, once it starts it’s both suspenseful, sometimes bombastic, and very satisfying. If you’re an action fan, you’ll dig Assault on Precinct 13. If you’ve never seen this movie, you’re in for a treat. If you have seen it, then you already know how good it is.

As for bonus features on this new and very sharp looking Blu-ray from Scream Factory, there are first and foremost a couple of audio commentaries here. The first one is with director John Carpenter. The other is with Tommy Lee Wallace who was the art designer, sound effects man, and longtime pal with Carpenter. In addition to those, there are also a few interviews. One is a Q & A with John Carpenter and star Austin Stoker that was recorded at the Egyptian Theater on 2002 and runs 23 minutes. There is a more recent solo interview with Austin Stoker that’s about 8 minutes long. Then there is a nearly 13 minute interview with actress Nancy Loomis, who would Also show up in Carpenter’s next movie: Halloween. The trailer, radio spots, and a still gallery bring these extras to a close.

Assault on Precinct 13 is one down and dirty flick and I love it. It is one of those old school action films that they sadly just don’t make any more, and the fact that it looks great on Blu-ray is a hell of a bonus. This is a must have for any action junkie, fan of John Carpenter movies, or just anyone that likes low budget but extremely ambitious movie making. Consider it very highly recommended and if you would like to pick this up for yourself, you can get in on November 19th.