Are Sequels Really Worse Than The Original?

We all know intuitively that sequels never really seem to capture the same magic that the first movie in a series has, but is there proof that this is indeed the case.  It turns out that there is.  Mike Anderson from Nerd Wallet has done the analysis, and here is what their website has to say:

Pirates of the Caribbean 4 was bad. It earned, on average, 33% from the critics – an “F”. How much worse could the fifth installment be? By our calculations, it’ll earn a 31% rating – 61% worse than the original.

We found this in our analysis of all major film series released since 1964. We broke down reviews from the critics and revenue at the box office to pin down the diminishing returns of sequels:

How Pirates’ decline compares to the average series

In 2003 we all loved watching Elizabeth and Will sail off on the high seas. But with the fifth movie coming out in 2015, we don’t know how much longer we can take Captain Jack’s drunken puns and raccoon makeup.

It wasn’t always this bad. After the twist in the final minutes of the first film, we were all itching to see the second. And it shows: Pirates 2 earned $100 thousand dollars more than its predecessor. But were the third and fourth sequels truly necessary or are the producers just trying to milk the franchise cash cow?

The general trend points to the latter, as you can see in the table above. All in all, when the fifth movie rolls around, on average, it is 48% worse than the original.

Pirates’ fall is particularly spectacular, having already flopped harder than most series. By the time of the fourth movie, critics were already extremely displeased: On Stranger Tides earned a 33%. That’s a 58% drop from the first film, which earned a 79% from the critics (Note: we measure dip in quality by percentage change, not percentage difference – the difference between the first and fourth’s average reviews is 46%).

Next time you’re thinking about seeing that upcoming sequel, consider waiting for the DVD or until it’s out on Netflix. Because all movie producers out there should learn: if it ain’t broke, don’t fix it.

We analyzed the following series: 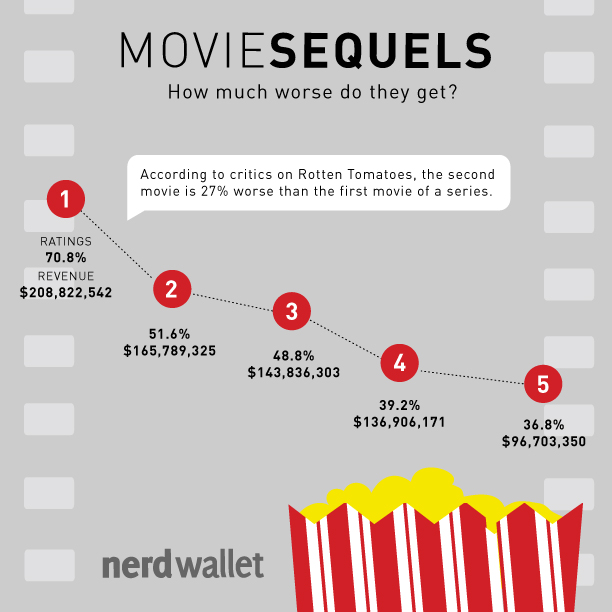