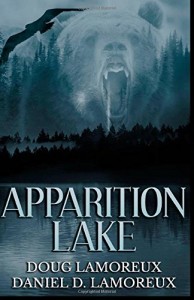 Message Body:
Apparition Lake, the new supernatural horror thriller from Doug Lamoreux and Daniel D, Lamoreux is now available on Kindle and in paperback from Creativia Publishing via Amazon.com

Something is terribly wrong in the nation’s oldest national park.

Horrific deaths have occurred throughout Yellowstone and everyone believes that a monstrous grizzly bear is on a rampage. Scientific evidence suggests another terrifying conclusion. For Chief Ranger Glenn Merrill, putting an end to the mysterious deaths is more than just his job, it is a mission that will take him to the brink of death and shatter the foundation of his beliefs.

Apparition Lake plunges Glenn, his full-blooded Shoshone friend Johnny Two Ravens, and Jennifer Davies, an aggressive young biologist, into a world of Indian mysticism where mankind and nature struggle for control of Mother Earth. Apparition Lake races through its supernatural tale of an environment that has “had enough” and the Native American spirit it uses to mete out its revenge.

Apparition Lake is written by brothers Doug Lamoreux and Daniel D. Lamoreux. Doug is the award-winning author of Dracula’s Demeter (now being adapted for the screen by ThunderBall Films), The Devil’s Bed, The Melting Dead, and Corpses Say the Darndest Things: A Nod Blake Mystery. Dan is an award-winning wildlife photohgrapher and outdoors writer.