And the Hills Opened Up – Book Review 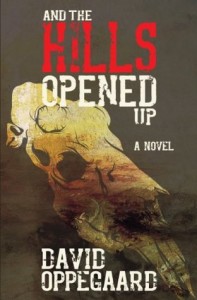 And the Hills Opened Up

Horror novels are not easy things to write. Despite the many volumes to the contrary, sustaining a horror story for several hundred pages is a very tricky thing. The mood, mystery and threat which propels the best horror writing can be exhausting for both reader and writer if not done deftly. With And the Hills Opened Up, David Oppegaard has delivered a short novel that pulls that trick off with grace to spare.

Set in Red Hill, Wyoming, circa 1890, And the Hills Opened Up begins as these things often do, with something very unpleasant being unearthed by an unknowing and uncaring group of miners. This creature, rather than taking its time selecting its victims, begins a full-scale assault on Red Hill that shows no mercy or reason. The threat here isn’t so much a killer as a full-on agent of total apocalypse. Residents of Red Hill, sordid and innocent alike, do what they can to fend off the rising tide of death. Very few, if any of them, succeed and it is never pleasant.

And the Hills Opened Up takes a cue from Stephen King or the The Walking Dead, as it travels with several characters who are caught up in the terror. None are favored and the cards are never tipped to reveal when and how each of them will meet their fate. There’s plenty of good character depth to most of the residents we meet, so their doom is felt even more acutely. Oppegaard makes it pretty clear from the start that women and children will not be spared out of some sense of generic decorum. Even so, Oppegaard knows when to look away and when to keep your gaze locked onto the crimson reaping of his monster. Humanity underlies every moment of the ordeal, and only one of the deaths feels like retribution. This is not the meting out of holy justice.

Oppegaard negotiates the narrow way of staying within the established pathways of genre and riding off that trail. You’ve got many of the stock characters of the western small town, but these types are used to good effect. Young Sherriff Atkins is the earnest “star” in town, but he’s not as confident as he acts. Reverend Lynch is neither pure holy man or faithless, he is one of God’s working men; he’s doing a job he doesn’t always like or understand.

With it’s genetic background of western and horror, And The Hills Opened Up had to be a pulpish event, but Oppegaard builds his penny dreadful with firm paper and leather. As much fun as he is having with his mayhem, there are moments of prose genius and insight that stab harder than the claws of his vengeful demon. A brisk read, this book keeps mystery and danger going for the entire page count. You may feel, like many characters in the story, that the ending comes too terribly soon.