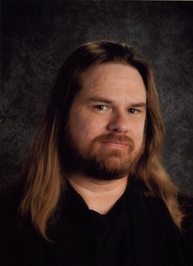 HELL NOTES: To begin with, Steve, how did such a poignant, morally challenging tale like Amara’s Prayer come to take over your imagination in the first place?

STEVEN E. WEDEL:  I guess it would start with my Pentecostal upbringing. I always knew the tongue-speaking everyone’s-going-to-hell brand of religion wasn’t for me, but I was convinced there was … something more than us. Something more powerful. That led me to a lot of spiritual exploration that provided the research for the theology and mythology of Amara’s background. And then the big thing happened at the University of Central Oklahoma where people I thought were my friends betrayed me in an effort to get me arrested and expelled. We all worked on the school newspaper. It was my job to proof the paper, but they didn’t like criticism, and the university president didn’t like that I dared to challenge his plans for the campus. Anyway, my email was hacked and a “death threat” was sent from my account the day after the Columbine shooting. I was 33 years old, with a wife and two kids, but the campus cops decided there was a chance I’d emulate those 17 and 18-year-old outcasts and shoot the place up. I burned with hate for a long, long time. It still really pisses me off to think about what they did. But, it made me wonder how much betrayal a person could forgive. That coupled with the question of whether or not a person’s faith is real until it’s tested led me to Amara’s Prayer.

HL:  What can you tell us about the initial reactions to your thesis?

SW:  The initial reaction of my thesis committee was pretty positive. Dr. Laura Gibbs (author of an excellent translation of Aesop’s Fables) directed me down some research avenues I hadn’t explored. My defense went well. I was really nervous, but they were smiling when I came in. Dr. J. Madison Davis (a mystery author) told me it was a good sign when they were smiling.

HL:  What is it that kept this story locked up so long before it could finally see the light of publication with Bad Moon Books?

SW:  Bad agents, mostly. Quasi-agents, I probably should say. I have a knack of attracting kooks and shysters. I was hooked up with two people who claimed to be agents and between the two of them they tied the book up for several years. I got free of them and Roy at BMB accepted the book, then he had some financial issues that pushed the book back. In the meantime I got a real agent, so I pulled Amara’s Prayer, but my agent, after reading it, believed that the book had too many encounters and that it “reads like a really good book published by a small genre press.” So, I went back to Roy and asked if he was still interested. The book was put back in BMB’s calendar and … here it is, nine years after I defended it as my thesis.

HL:  How might the book and the theories it hammers home have differed had you written the book nearer it’s current publication date rather then back when you originally penned it?

SW:  That’s a good question. I don’t think the theories would have changed. As a promotional bit, I did a few entries on a blog at www.whoisamara.com, writing in the personal of Milton, and that was enough to convince me I still believe what I did when I wrote the book. I have to wonder if there’d be so much explicit sex in the book if I wrote it now. Looking at my Werewolf Saga books now compared to SHARA, published in 2003, I’ve toned down the sex, closing the door instead of describing every thrust and gush. And yet, sex is a very integral part of the novel, so maybe I wouldn’t have changed it.

HL:  What do you hope readers take away for themselves after reading Amara’s Prayer?

SW:  I hope they take away a couple of things. Hopefully they’ll think about how we treat each other, but also they’ll look at what the believe in a spiritual sense and question if they’ve earned that belief or if they’re just accepting what they were told to believe.

HL:  Any plans for revisiting and/or expanding on world of Amara and Milton’s again, or anything similar?

SW:I think I’ve said everything I need to say about Milton and Amara. That’s not to say Milton won’t make a cameo in some future story, though.

HL:  And finally, do you seriously have to water your house in the summer?

SW:  Yes, I do. I didn’t this summer because we had record rainfall, but typically the ground will get so dry that it shifts and that’ll cause our doors to not close correctly. On top of that, in the last few years we’ve seen increased earthquake activity, so it’s even more important to keep the ground around the cement foundation moist. Someday I’d like to experience some of those 10-foot Canadian snow drifts, even if you do measure them using the metric system.

You can learn more about Steven E. Wedel at http://www.whoisamara.com/