An Aurora Grimeon Story: Will O’ the Wisp – Book Review 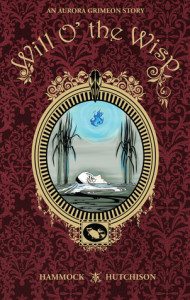 An Aurora Grimeon Story: Will O’ the Wisp

“Dear Aurora, I have been asked by a woman of some influence on the Isle that you take care to only travel on odd numbered days and do not arrive on a day when the moon is full…Lastly, if you could bring your father’s glass eye with you, I would be most grateful.”

So begins An Aurora Grimeon Story: Will O’ the Wisp, a recent YALSA nominee for Great Graphic Novels for Teens; ripe with superstitions, Hoodoo practices and teenage emotions from writer Tom Hammock and illustrator Megan Hutchison.

The story follows recently orphaned teenager Aurora Grimeon, who, after her parents die from accidentally ingesting poisonous mushrooms, is sent off to her only living relative, her estranged grandfather Dr. Silver Grimeon. Here on Ossuary Isle, a small cemetery island deep in the swamps of Louisiana, a grieving Aurora quickly discovers that superstitions and Hoodoo practices run rampant in the close-knit community as a mysterious will-o’-the-wisp makes its presence known and townsfolk start to disappear. Under the protection spells of the local Hoodoo woman Mama Nonnie, and with the companionship of her grandfather’s pet raccoon Missy, Aurora sets off to uncover the truth behind the will-o’-the-wisp and the ghostly secrets that Ossuary Isle holds deep in its sinister swamps.

What makes this an enjoyable read for both young and old is that it’s easy to relate to our young heroine. Although her journey begins in dire circumstances, she doesn’t let her misfortunes define her. Instead, as she searches for her place in the world, she comes to accept the new life she’s been given and takes the matters of others into her own hands. Aurora willingly indulges into the Hoodoo practices that Mama Nonnie teaches her and, as the residents of the Isle blame the recent string of bad happenings on her arrival, she tackles the mysteries of the swamp on her own, not only to save herself, but the others who look down upon her with judgmental eyes.

The story is to the point and nicely paced, but the dialogue between characters is a tad awkward and unnatural at some points, a flaw that can be slightly off-putting. However, all awkwardness is easily brushed aside with one look at Hutchison’s beautiful and intricate illustrations. As with any good graphic novel, the images are the bread and butter – they help create a more intimate and cohesive perception of the story; the illustrations in Aurora Grimeon paint the perfect gothic picture, they successfully achieve in picking up the slack where the dialogue leaves off. The bleak and moody landscapes depicted throughout the novel using muted earth tones are brought to life at key moments in the story with sharp, vibrant hits of greens and blues, colors used both sparingly and beautifully to differentiate between the forces of good and evil; with Aurora often standing out in black and rich purples.

The design of the book itself takes the macabre experience to another level with no detail overlooked. A beautifully bound hardcover endeavor dripping with the look and feel of a novel from the 1800’s, the book features a golden clasp that links the covers together while the Victorian wallpaper background radiates the gothic ambiance of the story. Even the spine of the novel is intentionally designed to mimic a book Dr. Grimeon may have in his morbid collection, a detail much appreciated for those looking to add to their gothic library.

An Aurora Grimeon Story is macabre eye-candy for readers of all ages who enjoy a fun and easy romp. The illustrations are the pièce de résistance of the novel, both stunning and compelling enough to keep reader entertained throughout its pages, even though the book itself sometimes reads more like A Beginners Guide to Hoodoo than a teenage gothic mystery. But hey, that’s not necessarily a bad thing – after reading this book, you may find yourself sweeping brick dust across your door to keep the evil spirits at bay.