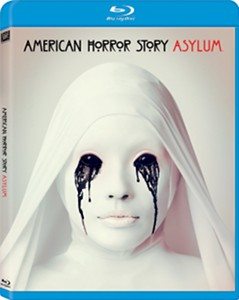 I love American Horror Story, if for no other reason than every season it offers something new. Every season has a new horror tale to tell. Sure, many of the cast show up for each season, but they don’t play the same characters. In this day when so many shows start off strong, only to outstay their welcome and spiral downward into the dreaded world of blah television (yes I’m looking at you The Sopranos, Lost, Supernatural…and maybe even Dexter?), this approach could keep things fresh, fun, and frightening for a long time to come. So for that alone I give AHS applause. The fact that each of its two seasons so far have been packed with thrills, chills, blood, sex, funny moments, interesting plot twists, and lots of great acting and directing mean that this is must watch television for any serious horrorhead out there. But we’re here to talk about the new Blu-ray release of season two, simply called Asylum, so let’s get to it.

Oh first; SPOILERS. Now normally I really try to do my reviews without giving anything away, but in order to do any sort of justice to the insanity of Asylum, I’m going to have to bring a few things up. So if you have yet to see this season of American Horror Story, just take my word for it that you really, really should. It’s fun and often creepy as hell and there is certainly no other show quite like it on television anywhere. Now skip over the next paragraph until I give you the all’s clear on spoilers.

Asylum is about, well an insane asylum in the 1960s and all the horror and insanity that entails. If there have been any complaints about this season by some (but not by me), it would be that Asylum seemed to be a bit overstuffed. Found within these 11 episodes are old school circus freaks, sexy nuns, serial killers, demonic possession, exorcism, Nazis, alien abduction, racism, unlawful imprisonment, homophobia, mutant monsters, dark moments in history, an ode to slasher flicks, angels, medical experiments, Catholic church cover ups, evil Santas, surgical mutilation, and more than a double dose of insanity. However, it is because of that theme of insanity that I think all this weirdness works so well here. Remember, this season is called Asylum, so I think the show runners really embraced that and tried to throw in as much crazy as they could. They wanted the viewers to be overwhelmed, unsure of what’s going on, and unable to guess what would happen next. In Asylum they achieved all three goals expertly. Did they make things too insane? Well you will have to be the judge of that for yourself, but as for me, I loved it.

OK, the SPOILERS are over.

For a quick, SPOILER FREE wrap up of Asylum: a young man is sent to an asylum for the criminally insane during the 1960s because he’s believed to be a murderer. He is pretty sure he’s not the killer, but even he’s not 100% on that, because he saw something unbelievable the night something bad happened to his pretty wife that has him questioning his own sanity. Once committed, the young man meets all sorts of crazy folks, a few downright evil folks, and season standouts like Jessica Lange as the “spare the rod for no one” head nun that runs the place, James Cromwell as a diabolical doctor with a dark past, and Sarah Paulson as an inquisitive reporter with a secret to hide that soon finds herself in way over her head. Before long there are mysteries aplenty, enough plot threads to give the world’s largest ball of string a run for its money, lots of gory deaths, more than a bit of erotica, and enough “WTF was that?” moments to keep you coming back for more, episode after episode. You want compelling television? This is it, right here.

The new Blu-ray three disc release from 20th Century Fox not only has this show looking amazing in HD, but collects a nice assortment of extras. There is a 9 minute short film called “The Orderly” that’s largely a season overview, but it was still a fun watch. There is the standard behind the scenes featurette that runs 22 minutes. “Welcome to Briarcliff Manor” is a 15 minute featurette all about the amazing sets that the show was shot on.  Another 15 minute featurette called “The Creatures” is all about the amazing makeup effects from the show. Lastly there are 6 minutes or so of deleted scenes collected here. Sadly, there are no commentary tracks and I always like to get some inside info, especially on a show as weird as this one. But still, it’s a nice gathering of goodies for all the Asylum fans.

American Horror Story: Asylum is a damn fine season of a damn fine TV show. I really enjoyed each and every episode of it, from the amazing slasher-esque start to the very satisfying end, and all the crazy in between. If you want to talk a walk on the insane side of horror, this is the show for you. Consider it very highly recommended.