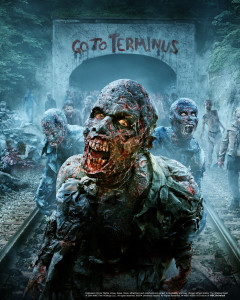 Those who Arrive, Survive…

Back by popular demand: all-new, original mazes inspired by

Season 4 of the Emmy-Award Winning series

This year’s bone-chilling mazes will place guests at the heart of a harrowing journey to seek sanctuary at Terminus, an elusive destination that promises community for all. Mirroring the terror that befell the residents of the West Georgia Correctional Facility, now overrun by savage walkers, the experience will send guests fleeing from the fallen prison into unknown territory as they once again stage a desperate battle for survival against flesh-eating walkers and ruthless humans.

“The Walking Dead” is based on the graphic novel written by Robert Kirkman and published by Image Comics. The series tells the story of the months and years after a zombie apocalypse.  It follows a group of survivors, led by sheriff Rick Grimes, who travel in search of a safe and secure home. “The Walking Dead” is the number-one show on television for adults 18-49.  AMC’s “The Walking Dead” returns for Season 5 this October.

“This has been an incredible collaboration and I am thrilled to be working once again with the creative teams at Universal Orlando and Universal Studios Hollywood to bring the world of ‘The Walking Dead’ to our dedicated fans,” said Greg Nicotero, Executive Producer and Special Effect Makeup Supervisor for the series.  “I can’t wait for visitors to experience first-hand some of the iconic moments from Season 4 in what will be the biggest, most exciting and frightening ‘Walking Dead’ maze to date.”

Universal Orlando’s maze will be the largest maze ever created at Halloween Horror Nights. It is literally double the experience and will feature more scareactors in one single haunted house than ever before. Guests will encounter iconic scenes from Season 4 of the hit show – beginning at the prison, fans will enter the cell block where the infection began, escape into the massive Big Spot location with a crashed helicopter ripping through its ceiling and journey to the dilapidated country club overrun with walkers. These and other incredibly immersive environments culminate to the maze’s finale taking you to the End of the Line – Terminus. This year’s maze will be an entirely new experience, featuring never-before–seen walkers and brand new scares.

“Bringing a horror property back for a third year in a row is always a decision that is carefully considered. Fortunately, The Walking Dead is unlike any horror brand around. Its appeal spreads across so many types of viewers. Hardcore and casual horror fans alike are watching week after week, and season 4 offered many new and unique environments and walkers,” said Michael Aiello, Creative Development Director  for Universal Orlando’s Entertainment team. “This year, we are taking this partnership to the next level, with a monstrous soundstage maze and a scope that is bigger and badder than anything we’ve ever done in the history of our event.”

This year, Universal Studios Hollywood will bring multiple interactive experiences from “The Walking Dead” to life throughout its “Halloween Horror Nights” event.  “The Walking Dead:  The End of the Line” will channel the many iconic scenes from Season 4 into a new maze, inviting guests to encounter the terror they viewed from afar.  From infected walkers whose bleeding eyes struck a new chord of fear throughout the prison to the walker-filled tunnel on the crusade to Terminus, the ominous attraction will evoke a countless barrage of distressing images that will traumatize guests over and over again. The contemporary urban city streets, towering skyscrapers, brick-faced facades and industrial exterior movie sets that make up Universal Studios’ world-famous production facilities will serve as the backdrop location for this all-new, frighteningly realistic maze. Swarms of walkers will also reawaken in an all-new terrifying scare-zone located adjacent to the maze.

The engrossing cult favorite television series will seep into other parts of Universal’s backlot with, predatory walkers prowling the secluded wooded areas of the movie studio. “Terror Tram:  Invaded by the Walking Dead” will send guests on the daunting path to Terminus, interspersed with landmarks and walkers from Season 4, including the “burned moonshine cabin,” “charred walkers” and “mud walkers.”

“’The Walking Dead’ is a once in a lifetime property that has greatly expanded and redefined the horror genre,” said John Murdy, Creative Director at Universal Studios Hollywood.  “Our fans are as intense as the walkers when it comes to new interactive experiences that put them at the heart of the show, so it’s our responsibility to create characters and environments that are as authentic to the series as possible.  Working in partnership with the show’s Executive Producer and four-time Emmy Award-winner, Greg Nicotero, is incredibly rewarding. His expertise combined with our vision delivers the most outstanding and credible ‘Walking Dead’ experience anyone could imagine, outside of being on the show.”

Universal Studios’ “Halloween Horror Nights” events have a more than 20-year history of creating incredibly entertaining, horrifying Halloween experiences that are consistently rated the nation’s best. The events on each coast feature highly-themed, disturbingly real, haunted mazes based on everything from films to nightmares – and streets filled with hundreds of specially trained “scareactors.”

About Universal Orlando Resort
Vacation like you mean it at Universal Orlando Resort – where every heart pounding, jaw-dropping, goose-bumping second counts.  It is the only place where you can turn spending time with your family into spending time as a family.  Together, you can soar above Hogwarts with Harry Potter, swing above the streets with Spider-Man, become a Minion in the hilarious and heartwarming Despicable Me Minion Mayhem ride, and join Optimus Prime in the fight to save mankind on the new mega-attraction, TRANSFORMERS: The Ride – 3D.  And, coming this summer, you can step into The Wizarding World of Harry Potter – Diagon Alley.

Whether commemorating favorite films from every genre and decade, or creating acclaimed original programming, AMC brings to its audience something deeper, something richer, Something More. The network reigns as the only cable network in history ever to win the Emmy® Award for Outstanding Drama Series four years in a row, and boasts the most-watched drama series in basic cable history with “The Walking Dead.” AMC’s original drama series include “Mad Men,” “Breaking Bad,” “The Walking Dead,” “Hell on Wheels,” “Turn,” “Halt and Catch Fire” and the forthcoming “Breaking Bad” spinoff, “Better Call Saul.” AMC also explores authentic worlds with bold characters through its slate of unscripted original series like “Comic Book Men,” “Small Town Security,” “Talking Dead,” “Game of Arms” and “Freakshow.” AMC is owned and operated by AMC Networks Inc. and its sister networks include IFC, Sundance Channel, and WE tv. AMC is available across all platforms, including on-air, online, on demand and mobile. AMC: Something More.