All the Truth That’s in Me – Book Review 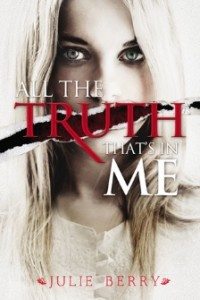 All The Truth That’s in Me

Review: A powerful, lyrical, poetic read, that is like a knife to the heart.

Two girls have gone missing, all in the space of two days, and only one was found. Lottie Pratt, dead, naked and floating in the river.  So two years later when Judith Finch was found, walking the tree line of the forest on her way home, you would think the townsfolk would rejoice. However, when they discover her rendered silent and her tongue cut out, Judith’s family and the townsfolk instantly mark her as cursed. Not being able to tell where she has been, why she was gone, or able to prove that she has kept her maidenhood, she herself becomes an outcast.  For in this pioneer time, your word, your grace, and your purity is all you have as worth.

Heartbroken, with reality and sadness, Judith fades in existence. To the townsfolk, her mother, and even Judith’s true love, she is only seen as tainted. Even still, Judith continues to press forth, mute and cursed.  She still believes that love can save her, willing her to come to everyone’s aid when they need her most, all the while secretly loving her childhood friend without ceasing.

The story takes you on the heart wrenching journey of an outcast who only wants to be accepted, and the horrors that are slowly revealed as you delve into Judith’s years of captivity. It further shows the inner workings on the implications of being impure, as unwelcome advances, and even danger, befall Judith . What Judith doesn’t realize is how her life will drastically change when war is brought upon her town; opening the doors to even more transgressions, such as murder and betrayal.

Vivid and horrific at times, Judith’s story is like a tiny snowball falling downhill.  As each moment passes, it gains speed and strength, making the story feel bigger and bigger until it lands perfectly in front of you, leaving you unable to look away.

Through her silence, Judith’s voice is even stronger, as her inner thoughts and feelings are delicately woven through the story, gently guiding you back and forth thru past and present. It is best described as a “pinhole narrative”- in which you gradually gain perspectiveoin Judith’s world as the pinhole widens until you can see the whole picture.

All the Truth that’s in me is a poignant, disturbing, heart pounding read, charged with emotional angst.

It is a story that gives silence a voice, while interlacing itself with many lessons in love, loss, and the heart of belonging. Like small explosives, this story explodes onto the pages, causing you to have a reaction, haunting you even after you read the last page.