All the Shadows of the Rainbow – Book Review 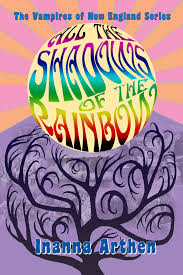 All the Shadows of the Rainbow begins in 1955. Diane Chilton is adjusting to changes that took place at the end of the previous book, including her own death. Diane is now a vampire. She returns to Boston after the Fae drive her from wallowing in self-pity in the Maine woods. An undead mage among the living, she searches for another vampire, beings so rare that even magic society doubts they exist.

The one minor issue with this book is that at times, the characters and references require familiarity with the previous book, The Longer the Fall (2010). The previous book introduced Diana Chilton as a magician in 1952 Boston who leaves her male-dominated order to attempt social change through magic. It did not end well for the attempt or the participants. Although Arthen does a remarkable job of gradually fleshing out these previous events without bogging the reader down in a ponderous recap, a little more background in the early chapters would have helped.

Diane went through her training with childhood friend Jack Garrett. He proposes that they start a secret coven and use their training and powers to subtly make the political and social changes Diane has long believed are necessary. With two other highly gifted magicians, they slowly begin manipulating people for the greater good. They begin to build a vast web of magical energy that allows them to determine where, when, and who to influence. As the 1950s become the 60s, Diane slowly begins to question the effectiveness of what they’re doing and whether she still trusts Garrett. Events in November, 1963 destroy the connection between the four, and they drift off on their own paths.

Alone again, Diane returns to her search for another of her kind. She finds Troy, a vampire in a commune starting an organic farm. Diane joins the commune, a haven as the 60s become a morass of drugs, violence and racism. Diane begins to suspect her former friend Jack Garrett has done the impossible—kept the coven’s magical web alive without the combined power of the coven, and his manipulating people is causing the violence and civil upheaval tearing apart the Age of Aquarius. Troy is leaving to follow a lead as to the origin of vampirism, but Diane realizes that she must stop Jack before he can usher in the end of modern society.

The story is taut, weaving historical events together with alternative, supernatural explanations. Diane does what she does, whether it is manipulating racists to change their minds, becoming a hippie, or helping the homeless with the sole purpose of bettering mankind, even though she no longer a member of humanity. Her decisions are agonized over, second-guessed and not always correct. Diane Chilton may be a vampire, but her humanity is never in question. It is a character worth knowing in a book worth reading.