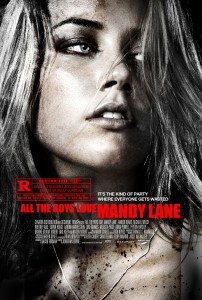 All the Boys Love Mandy Lane

In 2006, director Jonathan Levine completed his first film. It was a throwback to the stylistically gritty horror films of the seventies. The script, from newcomer Jacob Forman, was filled with originality and a macabre wit and was the talk of the indie film circuit before it was officially green lit.

When production began in early 2006 the buzz was that there was a new horror film being made that promised to be something special. Later in the year, the film made its way through some film fests in the South, it was shot in Texas, and up the East Coast where most who saw it claimed it to be a winner. It found a small theatrical release in the U.K. where the reviews were mixed but the good ones said it had style and originality, with some critics comparing its visual style with the work of the great Terrence Malick.

The buzz was getting stronger and trade magazines trumpeted the soon to be released new horror film that would be something original and shocking.

In a bizarre move, The Weinstein Company, who bought the film, sold it to an indie production company called Senator Films, who almost immediately went out of business and the film lingered in limbo until early 2013. The Weinsteins bought it back and have now released it through their own Dimension Films, partnered with Occupant Films, in select cinemas this Halloween season.

Seven years after its completion and following endless threats to it becoming another straight to video disaster, Levine’s film has finally arrived.

The question is, “is the film worth the wait?” The answer is simple.

All the Boys Love Mandy Lane is excellent and excitingly original. It is one of the most aesthetically pleasing horror films in years.

Amber Heard, who has since become quite the genre actress with roles in John Carpenter’s The Ward, Drive Angry and this year’s Machete Kills, stars as the orphaned, virginal, and dreamily beautiful Mandy Lane. When she returns to high school after the summer break, there is something about her that “all the boys” are attracted to. She has an allure in which no male, including her best friend Emmet, can resist.

When Mandy is hit on by a classmate at a party, there is a fight that later leads to a dare that causes a death. Emmet was near the boy who dies and, it would seem, he could have prevented this from happening. This causes a rift between him and Mandy and she begins to hang out with a new group of friends.

They invite her to stay at one of the friend’s farm for a weekend of partying. She accepts and the group go off for a weekend of beer, drugs, and good times. Mandy stays away from drug, drink, and sex and we wonder if her purity is part of what draws  the boys to her.

Soon, people begin to die in violent ways. The horror and bloodshed begin and for the final third, the film is a true edge of your seat scare film with an ending that is as brilliant as it is shocking.

Director Levine has structured his film in the way of the classic seventies thriller and horror films. Filmed in Austin, Texas, the film is always bathed in gorgeous orange and yellow hues. There is great use made of the vastness of Texas fields and highways.

The moments where the group is driving to the farm are reminiscent of Tobe Hooper’s work on the original Texas Chainsaw Massacre. The editing of the conversations and driving sequences are a deliberate throwback and homage.

Levine sets the first half of the film in the high school and we see Mandy Lane navigate her way through the cliques and daily routines that come with being a teenager. Many of these scenes give this part of the film a Brian DePalma-esque feel in the way the catty girls treat one another in the locker room and on the field during Phys. Ed. In the locker room scenes we are reminded of DePalma’s girls from his own Carrie.

What is smart about the screenplay up to this point is its focus on Mandy Lane’s reactions to what goes on around her. We wonder what is in her mind as she looks on some of her peers with contempt and others with pity and understanding. But who is she really? Why does she hold so strongly to her purity while hanging with people who curse, have sex, and do drugs? What is her driving force? The answer is for you to find out. It is a marvelously written character and extremely well played by Amber Heard. Even we are drawn to Mandy Lane.

The screenwriter dares to mix important teenage sexual issues into his horror and is triumphant. These are not just teens with high sex drives and clichéd personalities set up for a slaughter. These are real characters dealing with real issues that all teenagers go through every day. Again, it is a very smart and well written script.

It is in the final 20 or so minutes when the carnage begins. The tone in the film shifts only slightly, having already set up a somber mood. The filmmakers keep the mood going and amp it up when the horror starts. They are scholars of genre history and it shows here in every nail biting moment. The terror is palpable and the tension is, at times, unbearable.

Another welcome aspect of the film is the fact that there are no cheap, unnecessary, jump scares. Those moments are fine if they are done correctly, but here the director knows he doesn’t need them to create his fear and wisely steers clear.

As I mentioned, there are spurts of dark humor, but the film does not have its tongue in its cheek in any way. There is no joke for the audience to be in on. This is a film that sets out to terrify us with extreme tension and it completely succeeds.

As I said, there is a shocking final third and I warn you, it is gritty and ultra-violent. The final 15 minutes goes bat shit crazy, and I mean that in the best way possible!

Jonathan Levine went on to direct the very good independent film, The Wackness with Ben Kingsley, the decent indie drama 50/50 with Joseph Gordon-Levitt and Seth Rogan, and this year’s god-awful teen/ horror / zombie love story Warm Bodies. The man has a career and is now making bigger films. However, none of those films have lived up to the raw talent he shows here. His style and vision in this film is as adventurous as the filmmakers of the seventies to whom he tips his hat.

All the Boys Love Mandy Lane is a refreshingly successful entry in to the horror genre. It has style, substance, and originality and is consistently interesting, tense, and entertaining. This is something we almost never say about modern horror films.