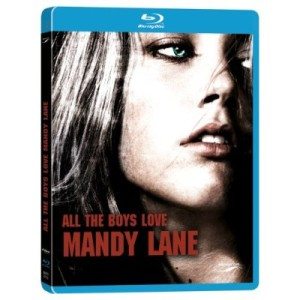 Shot in 2006, this movie has been M.I.A. in the good ol’ U.S.A. for a long time. The reason for that was…well I don’t know. I’ve heard a lot of fan theories and possible reasons on various horror websites, but all I know for sure is that this modern slasher movie has long been relegated to the realm of bootlegs and BitTorrents for a long, long time. Now, after seven long years, All the Boys Love Mandy Lane has received a snazzy Blu-ray treatment from Anchor Bay. Why now? Well maybe it’s because the girl playing the titular character is Amber Heard whose star has risen quite a bit since this movie was made. But the question remains; was this flick worth the wait?

No, not really. Don’t get me wrong, this isn’t a bad movie. I actually kind of dig it, but it’s nothing amazing, earth shattering, or all that original. It is a solid bit of new millennia, teen-focused horror with some way too pretty people as the cast. If that doesn’t sound like your thing, you can stop reading now, as that’s all there is to this one. If you still want to know more, please continue.

Amber Heard plays Mandy, the pretty high school girl all the boys are in love with. After some tragedy at a pool party where someone convinces a drunk guy to jump off a roof, a bunch of kids go out to an isolated farmhouse in Texas for a weekend of drinking, dope smoking, and sex. Gee, whatever could go wrong with that plan?

If you guess that someone starts snuffing the kids one by one then congratulations, you have seen a horror movie or two before. The good news is that some of the kills are pretty good and gory, so yay for that. The bad news is that they don’t start until around the 40 minute mark, and then they are happening to characters that are suffering from modern movie-itus. That being that they are all such douchebags or a**holes that you don’t care if bad things happen to them. In fact, in some instances you’re rooting for their demise.

Now there is a little mystery to this film as to who the killer is. Could it be the creep that caused the drunk guy’s accident and is now shunned by the rest of the school? Could it be the handsome but aloof ranch hand (played to cowboy perfection by Anson Mount now of Hell of Wheels fame) that’s behind the carnage? Well to find out, you’ll have to watch the movie.

The new Blu-ray from Anchor Bay looks crisp, sharp, and very colorful, but sadly it is lacking in the special features department. It only has an audio commentary with director Jonathan Levine. It is a solo commentary, and sadly Mr. Levine doesn’t have the charisma to be entertaining as he basically talks to himself for an hour and a half. It is at times a very technical monologue, so there is that for your filmmakers, but the elephant in the room, the question as to why this movie remained unreleased for so long, is never addressed. The director sort of hints at it and dances around it, but probably in an attempt to not offend anyone, he plays it safe and never spills the beans. Boo!

All the Boys Love Mandy Lane is an OK fright flick, but it is just that; OK. If you’ve been dying to see this movie for years because you’ve heard that it’s so good, you really should dampen your expectations a little before watching it. Nothing could live up to that hype, and this film is no exception. If you just want to see some decent mid-2000s horror, then you’ll probably appreciate it a lot more. So I can recommend Mandy to all the boys, and even the girls, but not all that highly.