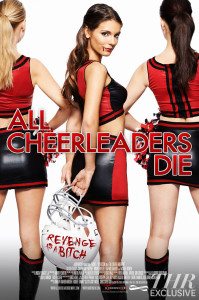 All Cheerleaders Die (2013), by directors Lucky Mckee and Chris Sivertson revamp their own 2001 low budget (10K) horror/comedy film. The original Cheerleaders was produced when they were just getting their start after film school, and the remake is the original concept on steroids after over ten years of percolating what could have been.

Although “remake” gets a bad name in Hollywood, in this case remaking your earlier horror films when you have the time and energy, not to mention a bigger budget, appears to be a very good decision when undead cheerleaders and their prey are involved.

High school’s a Darwinian snake pit as newly minted cheerleader Maddy Killian (Caitlin Stasey)  becomes the squad’s newest member thanks to the untimely death of a head cheerleader. Maddy’s ex-girlfriend and unpopular non-cheerleader Leena Miller (Sianoa Smit-McPhee) has a problem with Maddy joining the squad and having new “normal” friends.  Leena practices magic, makes her own clothes and also happens to have a mile high crush on Maddy. Leena is a shyer, nerdier version of Willow Rosenberg on Buffy the Vampire Slayer surrounded by Valley of the Dolls type cheerleaders with some witchy stalker tendencies thrown in for good measure.

The cheerleaders are anything but nice, and the adolescent class divides are the nerds like Leena, the cheerleaders who call each other “bitches”, and “the dogs”—the high school’s football players, led by bad boy and captain of the football team Terry Stankus (Tom Williamson) who gives jocks a bad name by being a power hungry, misogynistic sociopath. You’ve seen it before, but Williamson does a great job making Stankus seem menacing.

So when Maddy romances popular cheerleader Tracy Bingham (Brooke Butler), Captain Terry goes ballistic over losing his girlfriend to Cheerleader Maddy. Outcast Leena does her best to help her friend from the sidelines (and the other cheerleaders by default) and that’s when things get even more interesting and the film’s stakes get raised.

You see, Leena’s been dabbling with white/black mojo and she just might be able to link people together with a certain mystical energy that she controls with a magic rock that sometimes flies. Oh, and it might bring dead people back to life as well. And it glows. Sure, it sounds strange, but we haven’t quite entered Troll 2 territory yet. Mckee and Sivertson also break with horror film conventions, and there’s a strong feminist message in Cheerleaders, since female teammates assert themselves after being tormented by the pack of “dogs”.

Cheerleaders is revealed to be the first part of a projected horror trilogy. At the Austin film festival screening, co-director Sivertson commented that it’s only the first week of senior year and that there are “opportunities” for sequels. If Mckee and Sivertson can maintain the pace and style of All Cheerleaders Die, I can imagine having successful follow-ups if this level of quality is maintained in their projected horror franchise.

And although the tendency is to fill in the blanks and misread the film’s title as All Cheerleaders (Must) Die, by adding a nonexistent “must” Sivertson explains that the title’s just to say that cheerleaders die, just like everyone else and the title to some extent simply addresses everyone’s mortality, not that the filmmakers have it in especially for cheerleaders.

If you like some camp with your horror and appreciate Mckee and Sivertson’s sick and twisted sense of humor, and acknowledge that high school really was hell, and not the best time of your life, then you are the likely target audience for All Cheerleaders Die.