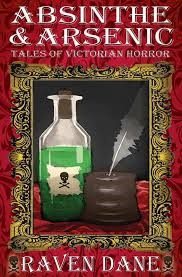 UK-based Raven Dane has had many short stories and poems published in horror and fantasy anthologies and is the author of several novels, including the critically acclaimed Legacy of the Dark Kind series and her award-winning series of steampunk/occult novels featuring Cyrus Darian, the third of which she is currently writing.

Absinthe & Arsenic is a collection of (mostly) ghost stories chosen or specially written for the anthology by Raven Dane. She has selected works ranging from one of the earliest in her writing career (The Attic Nursery) through to very recent short stories, including an excerpt from her award-winning novel Cyrus Darian and the Technomicron.

All of the stories in Dane’s outstanding collection are rooted in the late 19th century, and it is evident that she is an enthusiastic student of the era. The terminology and speech patterns she utilizes, along with descriptive passages that swirl like fog from the pages, create wholly believable settings dripping with atmosphere into which she threads effectively chilling ghost stories.

The collection begins with a terrifically bleak pseudo-zombie uprising in The 10.15 to Lealholm and then settles down into traditional Victorian ghost stories that could have been ripped from the spines of the penny dreadfuls of the time, such is their authenticity and Dane’s skillful prose. There are no weak entries in this collection, but my personal favorites were In Insomnium Veritas, Worse Things Happen at Sea, A Taste of Almonds, Ghostlight and Heart of Brass – each of the tales being unique despite their shared timeframe.

Although ghost stories are usually things of an intimate, whispered nature, I found the two tales that book-ended the collection, The 10.15 to Lealholm and Heart of Brass, to read like film synopses, the former feeling like a 60’s Hammer period piece and the latter like an early Del Toro film by way of Poe, which made the reading of them even more enjoyable.

This accomplished collection of short stories from Raven Dane would be an excellent introduction to readers who have yet to discover her work.