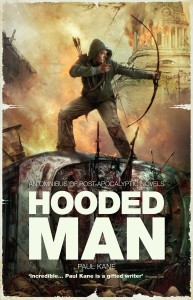 After the world died, a legend rises

“A tale that will keep you glued to the last page.” – Falcata Times on Broken Arrow

After the success of its School’s Out Forever collection, Abaddon Books is releasing a trio of Robin Hood-inspired post-apocalyptic novels by Paul Kane in an omnibus exclusively for the North American market.

When civilisation died and the world descended into a new Dark Age, Robert Stokes lost everything, retreating into the woods near Nottingham to turn his back on it all.

But foreign mercenary and arms dealer De Falaise sees England as ripe for conquest – and when he and his army arrive at Nottingham, Stokes is reluctantly drawn into the resistance.

From Sherwood he leads the fight and takes on the mantle of the world’s greatest folk hero. The Hooded Man and his allies will become a symbol of freedom, a shining light in the horror of a blighted world, but he can never rest: De Falaise is only the first of his kind.

The world has been devastated by an epidemic. Although there are pockets of an attempted continuation of civilisation, the truth is that the world has gone to hell in a handcart. The reason for this is a disease that has wiped out most of the world’s population. It kills almost all those who are not of the blood group ‘O neg’. Those people who survive are untouched. Everyone else dies. Infrastructures have collapsed. Mobs run rampant. The only kind of law that exists is that imposed by the people with the biggest guns. In this chaotic world who can bring hope and order?

The Afterblight Chronicles bring together the best genre writers in a shared world full of action-packed surprises and terrifying images of a world gone to the dogs, in a series that refuses to wallow in dystopian despondency when there’s meals to catch and cannibals to ward off!

Abaddon Books recently struck a deal with Multistory Films to bring The Afterblight Chronicles title School’s Out by Scott Andrews to the big screen.

Paul Kane has been writing professionally for more than 14 years. His genre journalism has appeared in such magazines as The Dark Side, Death Ray, Fangoria, SFX, Dreamwatch and Rue Morgue, and his first non-fiction book was the critically acclaimed The Hellraiser Films and Their Legacy. His award-winning short fiction has appeared in magazines and anthologies on both sides of the Atlantic and has been collected in Alone (In the Dark), Touching the Flame, FunnyBones and Peripheral Visions. His novella Signs of Life reached the shortlist of the British Fantasy Awards 2006, The Lazarus Condition was introduced by Mick Garris, creator of Masters of Horror, and RED featured artwork from Dave McKean. In 2008 his zombie story ‘Dead Time’ was turned into an episode of the Lionsgate/NBC TV series Fear Itself. He currently lives in Derbyshire, UK, with his wife – the author Marie O’Regan – his family, and a black cat called Mina.