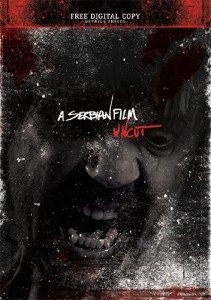 If you are reading this review, then chances are good that you have already heard of 2010’s insanely controversial movie, A Serbian Film. If you know anything about that flick at all, then you should know if it is the kind of film for you. But just in case you either (A) need a refresher or (B) are one of the few that have no idea what this movie is about, read my review of the Blu-ray that came out a few years back. Go ahead, you can find it here: http://hellnotes.com/a-serbian-film-blu-ray-review

Did you give that a read? Pretty horrible sounding stuff, right? Well keep in mind that was the censored version of this notorious film. This one is not. Do you still want to go on with me as I tell you what this new release has in store for you? Can you take it?

Okay, you asked for it.

Well basically it’s what you would expect to see in this film, plus a little more. Yes here they expand upon the two most infamous scenes from the original movie. There is a little more of the bloody puppet abuse from the “newborn porn” part, and the drawn out incest scene at the movie’s end gets a few more icky moments put back in. There is also a lot more gore in the beheading rape scene for fans of that. So for those that wanted more of all that stuff…what the f*** is wrong with you? But also, here it is in all its uncut gory, sorry, glory. Now don’t get your sadomasochistic erections too hard just yet, as the new bits are only a few seconds each, but yeah, there is more of the depravity that made this movie so infamous on display here. Yay.

The little bit more mentioned above is surprisingly non-awful stuff. Set mostly at the start of the movie, these few scenes further fleshes out our doomed protagonist, Milos, before he begins his dark decent. I can only guess that this stuff was cut out to trim back the running time of the original. There is a new scene where Milos is given oral pleasure while he watches a film of a teenage girl eating a Popsicle that I don’t remember from the original film. However, compared to all the stuff that follows it, I guess that part was removed from the original because it was too tame.

This new release by Invincible Pictures is exactly what you would expect. It is A Serbian Film, only with a few more naughty bits. If you loved the original movie for its grotesque violence, well you should love this one even more. If you hated it for that, this will give you more reason to hate it. If you were afraid or never interested in watching this film, then why are you reading this review? Oh and there is nothing added to this uncut version that would make you change your mind. There are even no special features or extras on tis bare bones DVD and that did make me sad. I would love to hear the director speak about this movie.

So can I recommend A Serbian Film: Uncut? Well, no, not really, but neither will I condemn it as so many others do. If you’re a fan of ultraviolent cinema, you’ll dig this disturbing movie. If you’re not, then stay the hell away from it. Consider yourself both informed and warned.