A is for Apocalypse – Book Review 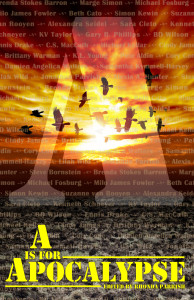 When I originally heard about editor Rhonda Parrish’s anthology A is for Apocalypse, my first thought was of the 2013 film The ABCs of Death, in which twenty-six different filmmakers were each assigned a letter of the alphabet and from that letter, they were given a list of possible titles. The filmmakers then created a short film based on their chosen title; the first short in the celluloid anthology being A is for Apocalypse.

Upon reading Parrish’s introduction in A is for Apocalypse, it was as I suspected – she had been inspired by The ABCs of Death and created this anthology in the same fashion. Parrish’s plan, as stated in her preface, is to create a series, twenty-six different anthologies each containing twenty-six stories, one story for every letter of the alphabet. As an ode to the film that inspired her, the title of each story isn’t revealed until its end, which made reading the stories a bit of a guessing game.

Every story in A is for Apocalypse revolves around the before, during or after of the end of the world. Whether this world is Earth or somewhere distant, whether the survivors are humans or something else, whether the story is told from the perspective of a human or something a little more sinister, there’s a fine balance of scenarios spanning cultures, timeframes and predicaments presented within the 300 or so pages.

In dealing with the human aspect of the Armageddon, a truly successful pre- or post-apocalyptic tale tends to delve into the study of human nature, mainly what would become of us, the human race? How would we survive? Suzanne van Rooyen’s F, Pete Aldin’s S and Cory Cone’s T stories are fine examples of how pressures of the post-apocalyptic world may bring some people well beyond their breaking point. BD Wilson’s L, Damien Angelica Walters’s U and Lilah Wild’s W stories touch upon the lengths some people will go to save the ones they love. Sara Cleto’s H, Kenneth Schneyer’s I, KV Taylor’s J and Alexis A. Hunter’s Y stories take the human emotions of the world ending and show them through the unlikely eyes of another.

With twenty-six different styles and voices, it’s a matter of opinion as to which ones stand up higher than the others. For me, I enjoyed KV Taylor’s well-paced J story, Gary B. Phillips’s hilarious K entry, Samantha Kymmell-Harvey’s beautiful V story, Lilah Wild’s thoughtful W story, and Alexis A. Hunter’s Y tale, which takes a horrible fad of a title and turns it into a wonderful story.

Just like the film, there are some hits and some misses, but with an assortment of plots and genres (some horror, some science fiction, even a few dabbling in romance and humour) there’s a little bit here for everyone. Fans of apocalyptic tales should find A is for Apocalypse entertaining and if Parrish follows suit with The ABCs of Death titles for the next instalment in her self-proclaimed “ABCs of Awesome” series (I second the motion!), I look forward to reading B is for Bigfoot.