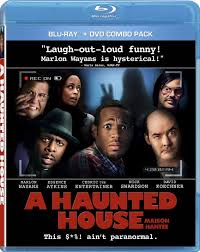 Plot summary: When Malcolm and Kisha move into their dream home, it seems like life could not get any sweeter. It doesn’t take long to realize there is an unseen force residing along with them. As the supernatural force becomes a wedge in their relationship, Malcolm seeks out the help of professionals in video surveillance technicians, a psychic and finally an exorcist.

Review: Wayans satirical look at the over indulgent, over saturated subgenre in horror of ‘found footage’ films is whimsical, at times juvenile, but all in all good fun. As a die-hard fan of terror on the silver screen I will openly confess that I find the whole single, shaky camera, paranormal investigation, found footage theme a little tiresome. Co-writers Marlon Wayans and Rick Alvarez take jab after repeated jab at the entire pop culture phenomenon, which makes this gem find its mark for me. To best enjoy A Haunted House I recommend checking your inhibitions and expectations at the door. If there is any genre of film that is more difficult to reach audiences than horror, it would definitely be comedy. One cannot force another to laugh. In certain ways the film already has an X against it because we sit down and watch, fully expecting one side splitting bout of laughter after another. This won’t likely be the case in A Haunted House, but it is still an enjoyable endeavor nonetheless.

The special effects and make up utilized in the film are the pinnacle of how supernatural terror should be portrayed on film. As we witness the transformation of regular person to demon, the look is very convincing, easily rivaling that of any other big budgeted horror film. It’s evident there was no expense spared when it came to creating a sense of authenticity for the audience.

A cast assembled with a blend of veteran comedians such as Wayans, Cedric the Entertainer and Dave Koechner compliment up-and-comers Marlene Forte (which you may recall from Mad TV) and Nick Swardson (Bucky Larson). Andrew Daly in the role of Steve and Allana Ubach as Jenny, the swinging couple truly steal the show in their persistence in trying to bed Malcolm and Kisha. Essence Atkins, who plays Kisha, will appeal to the young male demographic. Her diversity is impressive, coming into her own as a dramatic and comedic thespian.

The set design could easily pass for a mirror image of the Paranormal Activity franchise. It accentuates the believability factor of the film. Once again no ‘found footage’ film such as The Last Exorcism, The Devil Inside, The Exorcist Goes to Camp and The Devil in Moscow is safe from a good natured ribbing. Okay, so the last two were made up. At the rate these films are going don’t be surprised to see one or the other released in the next year or so.

Cinematography techniques used effectively depict live action and fade into security footage. Once again it’s a borrowed strategy from the Paranormal Activity films which is an excellent set up for giggles to ensue. Many of the gags will find their target with the young, urban male demographic perhaps with an enthusiasm for medicinals.

Fans looking for roll in the aisle laughter reminiscent of In Living Colour or the first couple of Scary Movie volumes will be ultimately disappointed. The project of A Haunted House stands on its own an ambitious production worthy of a glimpse.

-Three out of five skulls