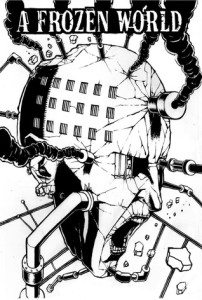 The world of graphic novels and comics is sometimes more fantastic than that of books and movies.  This is primarily because artists can put their stories into visual form, whereas authors have to spell their stories out (pardon the pun).  But if you can find an artist who also writes…well, you’ve struck gold.  Such is the case with Nick Andors, the author and illustrator of the graphic novel A FROZEN WORLD.  Andors weaves an intricate web of stories that intertwine within the backdrop of Irongates, the fictional, surrealistic landscape in which this book is set.  And while some of the book is symbolic and some of it is straight-forward, all of it is great and worth reading.

If you are not familiar with A FROZEN WORLD, here is the plot synopsis courtesy of the book’s official website:

A Frozen World is a full length graphic novel, an action-packed thriller with a psychological edge—the story of a place known as Irongates, the belly of the beast. The tales conceived in its icy womb leave even the most cold-hearted frozen.

A FROZEN WORLD is written very well and flows with a smooth pace.  The stories are separate but all share a common bond with the setting.  And they are all bleak and gloomy, stark contrasts to the bright and sunny (for the most part) world of reality.

The artwork is well done as well.  I particularly like how Andors chose to do the stories in black-and-white.  This helps to set the dark tone of the stories and even puts off a foreboding vibe that the envelops the reader like a menacing blanket.

My favorite story in A FROZEN WORLD is the second one, in which a man tries desperately to deal with the death of his pregnant wife from years before.  There’s a lot of emotion put into this story, and Andors conveys it like a pro.  The ending is chilling, and it will linger in your memory long after you finish reading it.

A FROZEN WORLD is a vibrant graphic novel that is worthy of notable recognition.  I highly recommend it, although be warned it is for Mature Audiences due to its content.  But give this one a look, and I think you’ll enjoy it.