A Demon in Dallas – Book Review 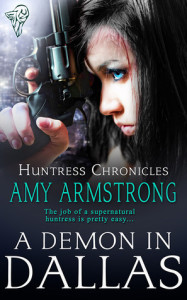 A DEMON IN DALLAS

Raven, a vampire huntress, has just seventy two hours to find her abducted partner Matt. The only key to finding her missing bounty may lie in the hands of her estranged lover, a shape shifter named Connor. With fairies, angels, wolves, vampires and witches lurking around every corner, the odds are stacked against her as the clock is ticking in A Demon in Dallas.

As an avid horror enthusiast, I’m always astounded with the wide spectrum of authors available to anyone’s fingertips at any point in time. With the emergence of a relatively new medium such as eBooks, the variety has only flourished making countless volumes, themes and authors available to choose from. We all have our favorite wordsmiths, no question about it, and from time to time when embracing the task of providing a review, one cannot shake the reminiscent sensation of elementary school when given the compulsory task of reading pre-selected material.

I had my reservations about Amy Armstrong’s A Demon in Dallas. The nagging question that refused to dissipate was: Why are we exploring repetitive themes that have been pulverized in recent years by Charlaine Harris, Anne Rice, and legions of others in between?

In some ways, I suppose I’m a little more partial towards innovation and the unique. But one cannot deny when a formula has proven effective.   Especially in the horror realm, the inclination to run with it is a powerful entity within itself. The fine people at Total E Bound books seemed to feel there is a viable market for such material, and as long as people continue buying and reading, then who are we to judge?

The actual plot sequence of A Demon in Dallas begins a little predictably and may frustrate some readers, but rest assured that once beyond the cusp, this read is well worth the wait. The tension that lurks between main protagonists Raven and Connor can be sliced with a knife. Their unresolved, unbridled passion will lure even the most cynical of readers to devour scene after scene.

We’re taunted and teased with some exposition between the two former lovers as their unrequited lust threatens to boil over.

Some may have difficulty relating to the character of Raven, which could be a major concern for a lead protagonist. She comes across as a little bit flighty, and even irrational. Her tendencies to obliterate the English language with gitchy catch phrases such as ‘Frenemy’ will appeal to a much sophomoric audience, and will in all likelihood infuriate avid literary aficionados.

The interaction between angels, witches, shape shifters and demons provides intrigue for the reader. Armstrong is very capable of crafting some most effective dialogue, emulating the good versus evil between each. Some of the fighting sequences deliver invigorating conflict. Where some of the readers may have been on verge of getting lost in prior passages, the conflict escalation takes on a life of its own much to the audience’s delight.

The eroticism between Raven and Connor is volcanic. Some of Armstrong’s most undeniable strengths are seen in setting the background for a tremendously steamy scene. With a little more passion deployed, I believe this author has the capability to become a force to be reckoned with.

As the story winds down we’re suspect to a potential sequel. In no uncertain terms this will provide allure to a market of devoted readers. The mystique of continuous plot with further volumes scattered will create opportunity for this premise to flourish and break free of the pigeon holed themes, and will stand on its own as a potential classic.