A Boy and his Dog – Blu Ray review 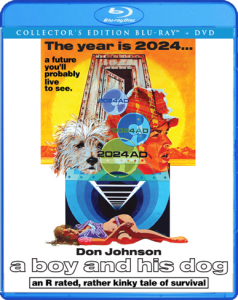 A Boy and his Dog

Imagine, if you will, me as a youngster around 12 or 13 years old, flipping through cable TV one late night, and coming across a movie with the innocuous title of A Boy and his Dog. Beginning with multiple Technicolor nuclear explosions, the next 90 minutes quickly convinced me that despite its title, this sure wasn’t a Disney flick. When it was all over I was left with a profound feeling of WTF did I just watch? And I loved that. I can honestly say that I had never seen a movie like this one before, and because of that, it has always held a special place in my heart. So three cheers then for the consistently impressive Shout! Factory for bring out this 1975 sci-fi dipped in weirdness classic on Blu-ray. If you’ve already seen this movie, then chances are you’ve never forgotten it and you already know how cool it is. So just remember to pick up a copy when it comes out August 6th. If you have missed out on this sublimely surreal sci-fi film, then keep on reading, but I wouldn’t recommend it. This movie is best experienced cold, for maximum mind-blowing effect.

Still here? OK, here we go. The story here begins by telling you that World War IV lasted just five days. Then we are introduced to our two titular “heroes” of the movie. The boy is a young Don Johnson in one of his first acting roles. The dog is a shaggy mutt named Blood, and the two have a very special working relationship. In order to survive in the harsh wasteland the world has become, boy and dog work as a team thanks to the psychic abilities of the dog. Yes, the dog is psychic and also has a wealth of historical information, sort of like a furry, walking computer. How the dog got this way is never explained, but it’s not important, just go with it.

So the dog and boy can communicate mentally with each other, and Blood uses his superior doggie senses to find the things the boy, Vic, wants. Namely women. After all, he is a young man at the peak of his surging hormones, so what else would he want? To thank the dog for his services at women finding, Vic finds them food and protects them from the many and various dangers of a post-apocalyptic world.

Now we come to the part when I explain why the word heroes in the paragraph above is in quotes.

The film begins, after the many colored mushroom clouds, with Vic and Blood watching a band of raiders raping and then repeatedly stabbing a woman. Once the raiders have their fun and move off, Vic goes for the woman, but not to save her. Upon seeing her bloody and near death body, his only regret is that they cut her up too bad for him to use, that otherwise she could have been good for “one or two more uses.” Yeah, what a charmer, but as repugnant as that is, that is one of the things that I liked most about this film. Most post-apocalyptic movies have a tough anti-hero that will begrudgingly do the right thing in the end. Vic and Blood are no heroes, anti or otherwise. They are just survivors, looking out only for themselves. Even later, when Vic finds a pretty young woman named Quilla June and he fights off a pack of rovers (read as: murderous, rape-happy thugs) for her, he doesn’t do it to be a nice guy. He only did it because he wanted to rape the woman himself. Yep, our hero, ladies and gentlemen. In fact, it is only when Vic starts to become a nice guy that he gets in trouble.

So while hiding from “green screamers” (some sort of green-glowing mutants they never show) with Quilla June, the woman gives herself willing to Vic, and so Vic starts having warm and fuzzy feelings towards the young lady. This drives a wedge between the boy and his dog, especially when the woman starts using her feminine wiles on Vic so that he follows her back home to an underground bunker called “down under.” What happens there I’ll not spoil here. This part of the flick is best experienced firsthand and not watered down with foreknowledge. I will say that it’s weird, creepy, and funny all rolled into one, but then that pretty much describes A Boy and his Dog as a whole.

Now for the special features and extra goodies on this new Blu-ray/DVD combo pack from Shout! Factory. There is an audio commentary with actor turned director L.Q. Jones, director of photography John Arthur Morrill, and film critic Charles Champlin. The best bit here is easily the nearly hour long conversation between the movie’s director and the author of the original novella, sci-fi caustic darling Harlan Ellison. It is nice to see Harlan liking something made from a story of his rather than railing against it. The tail end of this dog is the theatrical trailer and some radio spots.

If you are already a fan of A Boy and his Dog, you’ll want to get this Blu-ray as the movie has never looked better and it comes with some cool extras on the disc. If you have never seen this film then you’ll want to pick it up if for no other reason than you’ll never see another movie quite like it. That’s a rare thing in this world of cookie cutter cinema we live in. That alone should be reason enough for you to watch it, the fact that it’s really good is just a bonus. Consider the new Blu-ray/DVD combo pack of A Boy and his Dog highly recommended.