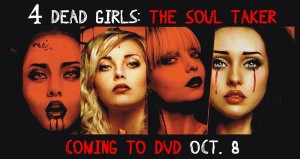 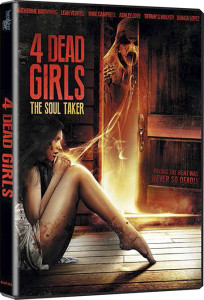 Lily (Browning), her best friend Bianca (Walker), sister Lori (Love), and Lori’s lover Pam (Verrill) move into their first off campus house together. The antics and the tempers run high. What they don’t know is that the owner is a Nalusa Chito – a soul taker – who eats the souls of evil women. And he has locked them in the house. For the girls, it is a battle to the death because only the innocent can kill him. Paying the rent has never been so deadly.

The DVD release (SRP $24.99) will include deleted scenes, interviews with the cast, and a look at the special effects of 4 Dead Girls: The Soul Taker.