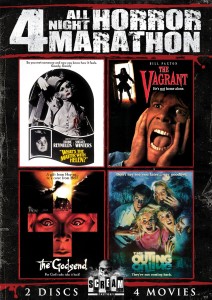 From the nearly always excellent Scream Factory comes this rare (for them) DVD-only release of four largely forgotten fright films. This two DVD set gives you four movies, 2 per disc, for a bargain basement price. You can find in on Amazon.com right now for only $9. That’s just $2.25 a flick, that’s nearly the same price as a rental. So they’re good and cheap, but are these movies worth even that? Well get your sleeping bags, I’m going to pop some popcorn, because we have an all-night marathon to watch.

First up is What’s the Matter with Helen? from 1971, and if that title reminds you of the earlier, and much better, What Ever Happened to Baby Jane?, I can only assume that was intentional. In this film, two women, (Debbie Reynolds and Shelley Winters) move to Hollywood looking for a fresh start after their sons are convicted of murder. The ladies open up a dance studio for young girls, but one of them, Ms. Winters, was already a little “off” to begin with, and things only go downhill once she becomes sure that someone is out to get them. Easily the best thing about this flick is watching Shelley Winters get crazier and crazier, and it is far more a thriller than horror movie, but it’s not without its charms.

Next is Bill Paxton hamming it up in 1992’s The Vagrant, a flick that is far more comedy than horror. Hmm, am I sensing a trend here? Anyway, this movie has Bill playing a mild mannered office worker who buys a new house, only to become obsessively paranoid about a dirty, scary-looking homeless person living in the empty lot next to his house. The fact that the titular vagrant likes to sneak into Bill’s house almost nightly sure doesn’t help the matter. If you like odd, black comedies, then you should get a kick out of this one. Michael Ironside showing up as a cop in here is just the icing on the cake. Of the four flicks found here, this is probably my favorite of the lot.

Staring off disc two is a British movie, The Godsend from 1980. It’s pretty much your standard evil kid movie, but it has its moments. The story is about a family that one night has a very pregnant woman show up unexpectedly at their doorstep. After the woman gives birth she suddenly and mysteriously vanishes. The bewildered couple decide to raise the child with their own children and that’s where the real problems begin. The best thing about this movie is that every time something bad happens, the camera zooms in on the evil little girl looking creepy and pleased with herself. I don’t know if that was meant to be scary, but it always made me laugh.

The last movie in this set is the one I was most interested in when I got it. The Outing (AKA The Lamp) is from 1987. I first saw in a theater back in ’87. It was also the only time I had ever seen it, but I remembered the film as a bit of silly, nearly so-bad-its-good, fun. It is about some young hooligans breaking into an old witchy woman’s house looking to rob her and unleashing a murderous genie that stalks and kills them one by one, slasher style. Too bad then that this movie looks absolutely horrible here. Everything is grainy and far too dark, to the point that it’s almost unwatchable. I really wish something had been done with this release to not make it look like a fifth generation VHS rip recorded from a fuzzy cable channel, but it wasn’t.

There are no extras on here whatsoever, but again, this is four flicks for under ten bucks, so I can let that slide.

Scream Factory’s 4 All Night Horror Movie Marathon is a bit of a mixed bag in both content and quality, however it’s a bit like an all you can eat buffet. Sure there may be stuff on the menu that you don’t like, but there’s bound to be a few things that you find tasty, and you just can’t beat the price. So for that reason alone, I can give this new four pack of fright a recommendation.