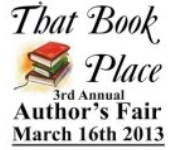 This year’s Annual That Book Place Author’s Fair will have National Bestselling Author – James Alexander Thomas its Guest of Honor. The Author’s Fair will also have the animal adoption fair again which was a big hit last year, several local businesses will be joining the event with various activities and keep an eye out for the possibility of a car show and girl scout cookie sales and not to mention 8000+ books at 75% off normal prices.

The authors who are currently scheduled to appear: