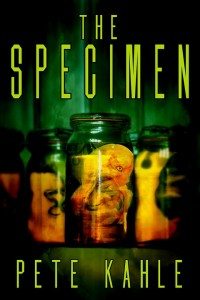 Pete Kahle’s debut novel titled The Specimen is a noble descendent of a number of novels featuring mind-controlling parasites. It is a formidable family headed primarily by Jack Finney’s The Body Snatchers and Robert Heinlein’s The Puppet Masters. Of the two, Kahle’s epic of over 500 pages seems to owe most to Heinlein’s classic novel. Like Heinlein’s creatures, Kahle’s parasites are slug-like and usually attach to the human’s back, although the author does add quite a few other gross oddities into the mix. Yet Kahle knows that copy cats are forgotten. He endeavored to create his own alternative Earth where the parasitic and tentacled mind controllers have been around for a very long time. While focusing mainly in the 20th and 21st century, we get glimpses of the creatures called “Riders” as they attempt to dominate mankind and the group of humans who fight them. If any novel can be called ambitious, it is The Specimen.

Most of the novel is centered mainly in modern day Massachusetts. We are introduced to a series of events, a collection of unsavory people and, in the tradition of many horror thrillers, innocent individuals who are in the wrong place at the wrong time. There are two basic timelines carrying the central story: one in the present, which is told in third party narrative and another in the 60’s presented in written reports from a group of researchers. The story also switches back and forth to other narrations including some in ancient times that give us a look at the Riders and how they originated. It is complex and ambitious storytelling that offers many participants and many viewpoints.

But this is where the book falls into trouble. The author must be given credit for an epic piece of storytelling. He has developed an alternative world that’s horrific but still detailed and believable. Yet at times, there are simply too many stories going on. One can fault it for being too ambitious. The reader never gets a good grounding on any one character. Everyone has a narrative, even the cat! Keeping track of all the people, times, and places become more of a chore than it should be. The background stories help set the origin of the Riders and how they interact with humans but it takes away from the main story. Overall, there is a sense of too much info and not enough focus. Much of this can be due to the need of a more exacting editor to cut down on superfluous descriptions and action. As good as the plot is, it felt like it should have been at least one hundred pages shorter.

Yet there is one aspect that sets this novel apart. The two books I mentioned at the beginning are classic novels but their monsters are just that…monsters. Kahle’s contribution in The Specimen is that his monsters are more three-dimensional. He puts a lot of work into what and why they are the way they are, perhaps more so than he does his human protagonists. This is the main strength of his work and why it deserves to be read even if there are some issues of structure and development. The time the author spends fleshing out the Riders and their place in this alternative history makes this a worthwhile and ultimately entertaining read. The ending leaves room for a sequel, which always leaves me nervous no matter how good the story is. However, Kahle can only grow as a writer and may develop his world into something even more interesting. Even with my reservations, I am looking forward to book two.