The Oatmeal Man is coming and he only took $150 to make! 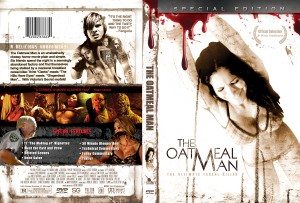 It started as a joke. Brothers Sean and Jesse Gordon were watching horror movies one night, and began joking about how funny and cheesy some movie monsters were. This sparked the conversational contest of who could think of the funniest and most ridiculous horror monster that hadn’t yet been done. At one point Jesse yelled out “Oatmeal Man“, and the contest was over.

The brothers, who’d filmed amateur comedy skits as teenagers, had always wanted to make a movie; The Oatmeal Man, they decided, was to be their guinea pig. Jesse started on the script, and Sean began calling in favors from fellow actors and friends.

“Since we had absolutely no money, I knew it would mean a lot of people volunteering their precious time, so I packed as much into each day of shooting as possible. It was my first time directing a movie, so I was a little nervous at first. But we were lucky enough to wrangle a group of actors and models who were enthusiastic about the idea, and who really gave it their all. Everyone’s mom made sure there was always food on the set – which we hungrily accepted! We filmed in family and friends’ houses, garages – anywhere they’d let us shoot. At the end of it all, I’d only spent $150 on production. Everything from camera to vehicles, gas, and locations were all borrowed or bartered for future favors. Post production was the same: ‘I’ll do this for your movie if you do this for my movie.’ And that’s how it was done, pretty much till the very end.”   – Sean

The film has since become an “Official Selection” at the B-Movie Celebration, and has garnered positive reviews:

“It’s the right thing to do, and the tasty way to do it.” – Fangoria

Monsters by Tom Devlin from SyFy’s Face Off

Starring John Karyus from Poultrygeist and many other B-Horror Films

The Special Edition DVD will be releasing domestically on October 19th 2014, and is jam-packed with a 30-minute blooper reel, 12 behind the scene vignettes, commentaries, deleted scenes, and more. Reserve your copy in time for Halloween!