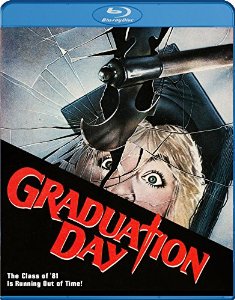 Graduation Day from 1981 is one of the many also-rans of slasher movies that flooded the box office after the success of Friday the 13th. Largely forgotten by all but the most diehard of horrorheads, I am of the opinion that this movie deserves better than that. Sure, it’s not one of the big boys of horror, it’s not even one of the fan favorites like My Bloody Valentine or April Fool’s Day, but it is far from a bad bit of slasher fun. So three chees then to Vinegar Syndrome for bringing this movie out on Blu-ray for the first time. If you’ve already seen this film, then you already know if you want to add this new Blu-ray/DVD combo to your collection, so this review isn’t for you. This s for the millions of horror fans that missed out on Graduation Day the first time around, or all the young blood that might not have ever heard of it. If this is you, then please keep reading.

Graduation Day starts off with that staple of 80s cinema: a montage, showing high school athletes training, performing, and even having some flirty fun out on the old track and field. However, the highlight of this bit is a race between four young girls. All the contestants are cheered on by fellow students and friends, and the coach is keeping track of the even with a stopwatch. The girls run, and the one everyone is cheering for the most wins, but she has pushed herself too hard and dies right after completing the race.

Jump to sometime later and an unknown individual is out for revenge for what happened to that girl. He stalks in the shadows, wears a fencing mask to hide his identity, and has a neat gimmick: he times his murder of each person he hates with a stopwatch, giving them the same 30 seconds to live that it took the dead girl to finish her race. And basically that’s it. This is your standard, early 80s, revenge-fueled stalk and slash, but it does have a few things that make it stand out from the rest of that graduating class.

There are early roles for two blond actresses that would go on to bigger and better things. First, there is scream queen extraordinaire, Linnea Quigley. The other is that unequaled letter-turner, Vanna White. There are a few highly memorable, if not a tad bit silly, kills that always make me smile. Two of my favorites I won’t completely give away here, but they involve a pole vault jumper and the other has a very lethal football involved. You will know both when you see them. Additionally, I like that the protagonist the story is someone retuning from military duty, and the fact that character was a woman was still a very novel idea back in the early 80s. That helps make her character stand out from the rest of the final girls that would do battle with psychos during that decade.

Along with a very nice HD transfer of this film, Vinegar Syndrome put together a nice collection of extras for this often overlooked slasher flick.  First there are two audio commentaries, one with producer, David Baughn, and the other is a fan commentary by the four guys that run the slasher-centric podcast, The Hysteria Continues. While the first track has inside info on the film, the second was just a whole lot of fun, and I hope the Hysteria boys do more commentaries in the future. In addition to those, there are four video interviews with people related to Graduation Day. Patch Mackenzie, the lead actress, has one that’s nearly nine minutes long, and director Herb Freed speaks for over 12 minutes. Producer, David Baughn, returns here for an 11 and a half minute discussion, and editor, Martian Jay Sadoff, gives a seven minute interview. Lastly there is the original theatrical trailer.

I like Graduation Day a lot. It’s not a slasher classic, but it almost is, and it is a far sight better than a lot of slashing schlock that’s out there. If you are a true slasher fan, this is a must have for your home library, and this new Blu-ray is a definite upgrade from the previous, bare bones DVD. Consider it recommended.