Review of Brett Talley, THE REBORN 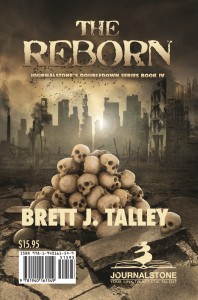 For almost as many reasons as there are individuals, abortion is one of the most controversial issues today.

Imagine a world, however, in which abortion was not only legal but government controlled.

Then go one step beyond government controlled to government mandated.

And these abortions are not performed cleanly, surgically (if such a thing were possible) but by brain-frying any fœtus found to be carrying a particular genetic marker in its DNA. The mother would not be hurt or damaged, but the life within would immediately cease to exist.

In this world, it has been discovered that some of the most heinous murderers, torturers, and serial killers are being reborn, their genetics impelling them toward a new life of horror in fifteen years or so. So wouldn’t it be logical to remove those carrying the potentially life-threatening genes (life-threatening to others, that is) before birth.

In this world, there is a special kind of soldier/police dedicated to locating and eliminating the dangerous DNA. They are a secret agency, known only to a few, and by those few referred to as “Shepherds”—after all, their job is to protect the larger flock, to control the dangers it might otherwise face.

And now imagine that in this world, the United States has recently suffered a devastating multiple-warhead nuclear attack that has destroyed the west coast and thrown the rest of the country—and the world in general—into turmoil and disarray.

Imagine all of that and you have the setting and premise behind Brett Talley’s The Reborn, a fascinating novel of possibilities and terrors, horrors and pessimism. Following his Bram Stoker Award® nominated work in That Which Should Not Be and The Void and his sterling efforts as a contributor to the first Limbus anthology and editor of Limbus 2, The Reborn is a master work of cross-generic balance, with elements of horror, science fiction, near-future dystopian, and post-apocalyptic storytelling.

What makes it even more powerful is his ability to tell his story on two distinctly different levels.

At the personal, specific level, it is the story of Marcus Ryder, unsung hero of the War that fragmented the world, now newly recruited into the Shepherds. He has faced blood and death—has caused more than his share of it—and lives with the memories every day. Now he must face the consequences of killing the unborn in order to avoid the future scourge of the Reborn. His new partner, Dominic Miles, is already seasoned, ready to show Marcus precisely what is required.

At the global, general level, it is the story of the War itself, of its beginnings in “an industrial backwater” in the middle of China and the emergence of a revolutionary leader who calls himself simply Khan. It is a tribute to Talley’s consummate storytelling ability that he can intercut chapters dealing with individuals and their challenges and growth with chapters outlining the strategic movements of nations and armies and never allow either to diminish in interest.

While all of this is happening (itself enough to challenge any author) Talley also provides readers incremental insights into the basic premise of the novel—that killing unborn babies and those that almost miraculously survive to be born—will save future generations from bloodshed and crime. With each chapter, each confrontation Marcus must survive, each advance by Khan and his fanatical armies, more information about the genetic strain and the databases used to combat it comes to light…with catastrophic consequences for Marcus, Dominic, Khan, and the entire world.

While The Reborn might lack the Lovecraftian touches readers of Talley’s other works have so enjoyed, it is nevertheless a more-than-solid work of speculative fiction, new in its approach to contemporary issues and captivating in its forays into a near-future world.