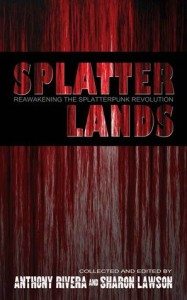 Splatterpunk refers to a movement within the genre of horror fiction which has no limits. This form of fiction goes beyond the extreme, by graphically describing scenes explicitly, violently, sometimes pornographically and more often than not, gorey to the max. So, if you are at all uncomfortable reading books of this nature, I suggest you pass. Keep in mind, due to the graphic content of this book, it is definitely not meant for those under the age of consent.

But, for those of you who love your horror most extreme; say in the vein of Jack Ketchum or Edward Lee, by all means, don’t pass this collection by! It will satisfy your taste most twisted and quench your thirst most bloody, I assure you!

Grey Matter Press is definitely making its presence known among the literary circles at an incredible pace! They describe this auspicious collection as delivering “on the promise” of “intelligent and hyperintensive horror”— and that, dear readers, they certainly do! This anthology, edited by Anthony Rivera and Sharon Lawson, houses the work of thirteen (how horrifyingly appropriate) incredibly talented authors. Splatter Lands screams terror in degrees you’ve never thought you’d read in print; at least not in a single anthology! These stories, take you to the very precipice of your comfort level and without mercy, push you over the edge!

The cover, though simple, leaves the reader guessing what lies beyond that first page.

The illustrations, (Carrion House/Luke Spooner) give the impression of those most often found in graphic novels, but succeeds in depicting each story with great precision; using but a few strokes of his magical pencil.

This reviewer, is quite impressed with this book in its entirety. Michael Laimo, a well known author of the macabre, opens this book with his short, “Heirloom.” Laimo, displays his grasp of imagery on a most disturbing level. Nonetheless, enticing the reader to venture passed the next page to cringe, helpless within his literary clutches! Another great author to grace these pages of gore is Ray Garton. Garton, never fails to satiate those who hunger trepidation most perverse. “Housesitting,” is no exception. The story moves quickly, with the velocity of thrilling anticipation. The ending, builds to a swelling climax that floors you at its unpredicted close.

Every author is worth mentioning here but one up and coming wordsmith struck a chord with this reviewer. This author is J. Michael Major. His ten page story, “Letter to My Ex,”

begins bitter and angry, then suddenly grips the temples of reality and presses hard! This one has you pleading before its closing lines. Shocking, sickening, brutally, disturbing horror does not come close to exemplifying the reaction this story generated. But then again, isn’t that what this anthology set out to do? And so, it does…