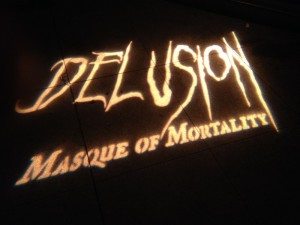 If you’ve been looking for a unique horror experience in LA and feared you might have missed out on the interactive play Delusion: Masque of Mortality, you’re in luck.  Examiner.com is reporting that the play has been extended almost to Thanksgiving.  As an added bonus, Neil Patrick Harris may stop by.

HAUNTED PLAY: The First Ever Interactive Horror Theatre Company was created in 2011 by Hollywood stuntman Jon Braver. Neil Patrick Harris joined the team in 2012 to help Haunted Play create more psychologically disturbing, interactive theatre experiences.2012 brought about Delusion: The Blood Rite; a stand alone sequel to 2011’s “Hottest Ticket in LA” said NPR’s All Things Considered. The Blood Rite was told through gripping interaction, suspenseful storytelling and explosive stunt work. Haunted Play dove deeper into fear by requiring the audience to make terrifying decisions to further the story.Delusion: The Blood Rite proved to be a runaway hit. Its run was completely sold out. The demand prompted not one, but two extensions. The show was considered by many as the new standard for live horror attractions. Fangoria magazine called it “…the single best horror event in LA.”. ShockTillYouDrop considered The Blood Rite “…the most thrilling and innovative experiences we’ve had.” and Dread Central glowed over “…the most entertaining, inventive, creepy, engaging, and downright fun experiences you’ll have!” . As well, KCAL 9 News Los Angeles braved the event!